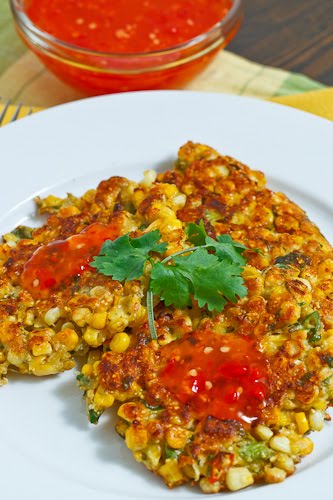 Last weekend there was a corn roast at the farmers market signalling the beginning of the local corn season. With the amazing aroma of roasting corn and melted butter everywhere, I could not resist coming come with an arm load of corn. One of my favorites ways to enjoy corn is to just have it on the cob with melted butter and a touch of salt but it was clear that I was not going to be able to make it through all of the corn in time so I needed to use it in a recipe to help finish it up. Luckily I had a list of things that I wanted to do with corn and I had just been waiting for it to arrive. On top of that list was some Thai inspired corn fritters flavoured with homemade curry paste along with some green onions, cilantro, lime juice and fish sauce. I immediately though of serving the fritters covered in a spicy peanut sauce but with the heat I wanted something a little lighter and a Thai sweet chili sauce sounded like it would be perfect. one of the things that I like most about these corn fritters, in addition to having an amazing flavour, is how some of the kernels on the outside start to get a little crispy taking on the texture of those partially popped kernels of corn in popcorn which is really nice. What a great way to usher in the start of corn season!