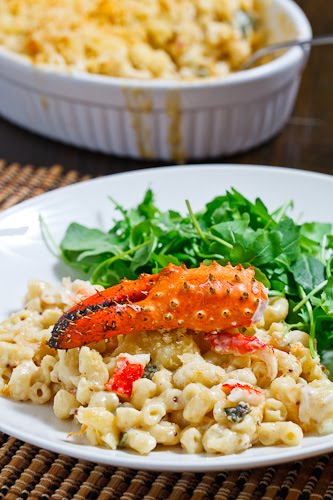 When I was in university, I practically lived off of macaroni and cheese and by the time that I was done I was so sick of it that I have not really touched it since. I recently came across the description of a crab mac and cheese in a menu that sounded so good that it convinced me that it was finally time to make macaroni and cheese. While I was contemplating the crab mac and cheese recipe, I kept thinking about crab cakes and eventually I decided to go with the idea and thus this crab cake mac and cheese was born.
One of the first questions that needs to be answered when making mac and cheese is: ‘What kind of a sauce do you want?’ and I decided to keep things simple and went with a bechamel sauce and in addition to the milk I added some cream to make it a bit richer. The next question that you have to ask is: ‘What kind of cheese do you want?’. When choosing a cheese you want to choose a cheese that is tasty and a cheese that melts well. I was thinking that I wanted to keep this mac and cheese white and that I did not want a cheese that was too strong in flavour that it would completely overwhelm the crab so I went with a gruyere and to that I added a bit of fontina which melts well. Continuing with the crab cakes concept, I seasoned the sauce with old bay seasoning, mayonnaise and a generous hit of grainy mustard. Crab cakes are generally made with bread crumbs and so I decided to top the mac and cheese off with a crunchy layer of panko bread crumbs.
The crab cake mac and cheese came together easily and it exceeded even my wildest expectations! It was nice and creamy and cheesy and just packed with flavour. The gooey melted cheese was amazing and the flavour of the crab came through well. This mac and cheese may be a bit decadent but it is so worth it! I particularly liked the way that the grainy mustard worked in it adding a bit of crunchiness. My aversion to mac and cheese is officially cured and I already have a few more ideas for some different recipes.