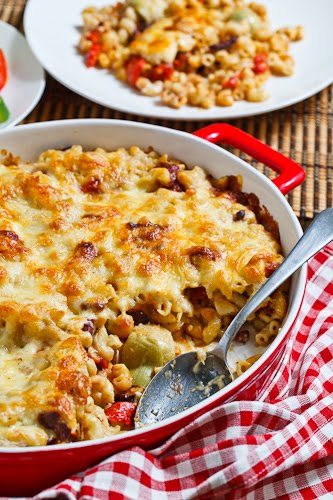 After far to much boxed mac n cheese in university I took a break from it until recently when I made a crab mac and cheese that I really enjoyed. I realized that there is a lot more that you can do than just your basic every day macaroni and cheese and ideas for different flavour combos have been swirling through my head ever since. One of those ideas sprang from the desire to use some of the roasted red peppers that were taking up so much space in my freezer.
Sweet roasted red peppers and tangy goat cheese are an amazing flavour combination and I was thinking that the goat cheese would work beautifully in a mac and cheese. From there I was thinking Greek flavours and some salty kalamata olives and feta cheese seemed like the natural next step. At this point I figured I was done but at the last minute I decided to bulk the mac and cheese up a bit with some artichoke hearts. I was thinking that the best way to get the goat cheese into the mac and cheese would be to melt it into a bechamel sauce which I seasoned with garlic and oregano. I also wanted to have a nice melted cheese topping so I added a handful of mozzarella cheese which is fairly mild and it melts well.
The goat cheese, roasted red pepper, kalamata olive and artichoke heart mac and cheese turned out really well! The flavour combination was simply fantastic and I quickly inhaled my bowl and was going for seconds in no time at all. I am definitely looking forward to enjoying the leftovers for lunch this week!