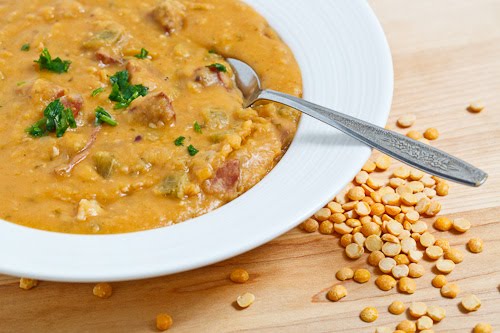 I recently made Cajun red beans and rice and it was the first time that I had had andouille sausage and I was quite taken by it and anxious to use it again. Given the chilly weather I was thinking that a soup would be just the ticket and I since I had also been contemplating doing a split pea soup, I decided that I would combine the two and do a Creole style split pea soup with andouille sausage. Split pea soup has to be one of my favourite winter soups and I really like the way the split peas break down and naturally thicken the soup and make it nice and creamy. Given that it takes a few hours for the peas to fully cook, you have a good long simmer on your hands which is just perfect for adding a smoky ham hock to imbue the soup with a ton of flavour.
For this soup I started with a base of onions, celery, green pepper, garlic and homemade chicken stock . To that I added some Creole style seasonings including paprika, cayenne pepper, oregano and thyme in addition to the andouille sausage. With that, all that was left was to sit back and let the soup simmer to perfection. I have to say that this is one tasty soup and all of the flavours work really well together! As tasty as this soup was on day one, this is one of those soups that only gets better with time so I am looking forward to enjoying the leftovers for lunches this week! This is the second dish that I have tried with andouille sausage and I was instantly hooked to both of them. I am looking forward to working with andouille sausage again.