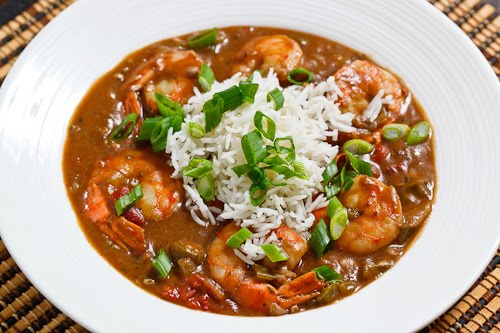 I have been wanting to try making a gumbo for a while now and with Mardi Gras here I figured it was the perfect time to make one. Gumbo is a stew that is made with a strong stock that is thickened, the “holy trinity” of vegetables; onion, celery and green pepper and some kind of meat. I was dead set on going for shrimp for the meat and since I had never tried okra before I had to go with that as well. The thickener in gumbo is usually one or more, of okra, filé powder or a roux which is made by cooking flour in a fat. Since I was not too sure on exactly how thick the okra would make things by itself, I went with the roux as well. The fat in the roux is usually oil or butter but you can also go with lard or bacon grease to add even more flavour. The trick with the roux is to get it nice and dark brown without burning it since all of that browning is just adding more flavour.
Since gumbo is described as starting with a strong stock, I had to go with making one myself and given that I was using shrimp in the gumbo I went with a homemade shrimp stock . I made the shrimp stock the day before to save time on the day that I made the gumbo.
Although this recipe is rather long and it takes a while to make, especially if you also make your own stock, it is not all that difficult and the final results are definitely worth the effort! One important point about this recipe is that the shrimp are not added until the very end to ensure that they are not overcooked and that they remain nice and plump and juicy and good. I served the shrimp and okra gumbo topped with rice and garnished with green onions. I am definitely looking forward to experimenting with more gumbo recipes in the future!

Option: For One-Pan: Make this a one-pan meal by adding 1 cup of rice and 2 cups broth or water (or 8 ounces of pasta and 2 1/4 cups broth or water) to the sauce after step 6 and simmer, covered, until cooked, about 20 minutes (or 12 minutes for pasta).
Slow Cooker: Implement step 1, optionally implement steps 2-4, place everything except the shrimp, green onions and parsley in the slow cooker and cook on low for 6-10 hours or high for 2-4 hours before adding the shrimp and cooking for another 10 minutes.
Similar Recipes:
Shrimp Creole
Shrimp Etouffee
Jambalaya
Shrimp and Andouille Grits
Creole Split Pea Soup
Cajun Red Beans and Rice
Shrimp Bisque
Blackened Shrimp on Kale and Mashed Sweet Potatoes with Andouille Cream
Shrimp Creole Soup with Bacon and Cheddar Dumplings
Cajun Sweet Potato Seafood Chowder
Cheddar Biscuits and Shrimp and Andouille Gravy
Cajun Shrimp and Andouille Cheese Dip