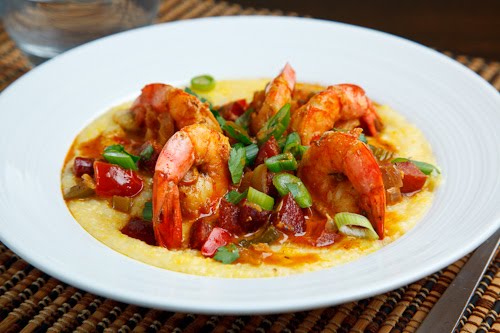 Shrimp and grits is another classic southern dish consisting of shrimp that is cooked in a sauce and served over grits, or cornmeal. I have been meaning to share this recipe for shrimp and andouille grits for a while now and with Mardi Gras coming up it was the perfect time to do so. Don’t let the long list of ingredients fool you as this recipe is actually really easy to make and it only takes about a half an hour to throw together. This is one of those recipes that I like to play around with a lot, changing things up but this version with the andouille sausage has to be my favourite. The sauce that the shrimp and andouille sausage are served in starts out with a base of onions, celery and pepper and it is seasoned with garlic, thyme and cajun seasoning before being smoothed out by some cream. Serving the shrimp and andouille over simple buttered grits is always nice but I like to add some cheese to the grits and a sharp white cheddar is particularly nice.