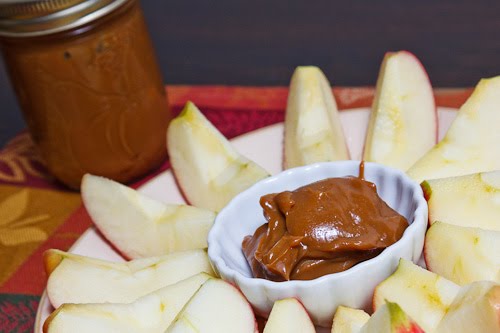 I have been seeing dulce de leche around the food blogging sphere since I started food blogging and it has always looked and sounded so good! Unfortunately I have had problems finding it. I could not find it for a long time but after I had given up I did come across some and I picked up a jar right away. The dulce de leche was a lot like a caramel sauce and it was so good that it disappeared really quickly leaving me craving more. When I went back to get some, it was all gone and I never did run into it again. I finally got tired of waiting to find it and I just decided to make my own.
Luckily there are lot of articles around as to how to make your own dulce de leche! Dulce de leche is made by slowly heating sweetened condensed milk until it caramelizes and turns a golden brown. The easiest way to make dulce de leche it to simply simmer a can of sweetened condensed milk in water for several hours. The down side of this method, and the reason that I held off on making my own for so long, is that apparently there is a risk of the can exploding. (Who wants to be cleaning caramelized sweetened condensed milk from their ceiling?) One thing that I noticed about the instructions that I found was that different ones called for different cooking times. From what I could piece together, you want to simmer for 2 hours to get a light and mild dulce de leche and the longer you leave it in for after that the darker and more flavourful it gets.
I finally had enough incentive to make my own dulce de leche that I gave it a try. I used my old stock pot because I didn’t want any possibility of rust touching my good pot and I made sure to keep the lid on and that the can of sweetened condensed milk was covered in water at all times. For the cooking duration I decided to leave mine in for 4 hours to get a nice dark rich tasting dulce de leche. Making the dulce de leche couldn’t have been easier and I did not have any problems. I could barely wait for it to cool and when I cracked open the can, it was dulce de leche, and it was a nice deep brown and it smelled amazing. I could not resist putting a finger into it right away and I was rewarded with an amazing caramely flavour! It was so worth making! I will definitely be making my own dulce de leche from now on and I will probably be doing it frequently!
I had not planned to make the recipe that used the dulce de leche until the next day but I could not wait that long so I enjoyed some of the dulce de leche with sliced apples. The thick, creamy and caramely dulce de leche goes so well with crisp juicy apples! It was a real treat!
How to make dulce de leche: