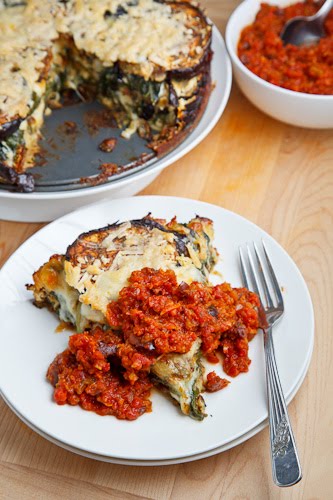 A rustic crustless pie with layers of eggplant, swiss chard and cheese that makes a great light meal when topped with a tasty marinara sauce and served with a salad.

With the weather cooling off a bit I do not mind having the oven on as much which opens the doors to a lot more recipes. This is good because there are a few of them that have been building up on my to try list and the first one on that list was this recipe for an eggplant tortino that I came across in a recent Food & Drink magazine. I am a big fan of eggplant but it had been a while since I last did something with it and the idea of using it in a savoury pie stacked in layers along with swiss chard and plenty of cheese sounded really good! One of the things that I like about this recipe is that the eggplant is roasted which helps to ensure that it is nice and tender in addition to bringing out its natural flavour. Another great thing about this recipe is that it uses no less than three kinds of cheese including provolone, which is melted into the creamy swiss chard layer, fresh mozzarella, which is stacked in the pie, and parmigiano reggiano (parmesan) which on sprinkled on top to melt while it bakes. I served this eggplant tortino topped with my favourite marinara sauce to which I added some chopped kalamata olives for an extra hit of flavour. 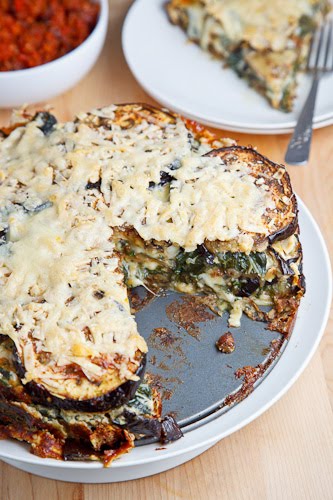 A rustic crustless pie with layers of eggplant, swiss chard and cheese that makes a great light meal when topped with a tasty marinara sauce and served with a salad.

Tip: Eggplant can be a bit on the bitter side and if you do not want this you can sprinkle the slices with salt and let them sit in a colander for 20-30 minutes before rinsing them, patting them dry and using them in the recipe.
Similar Recipes:
Eggplant Parmesan (Lasagna Style)
Pastitsio (Greek Lasagna) with Greens
Eggplant and Mozzarella Panini
Roasted Red Pepper and Italian Sausage Frittata topped with Marinara and Mozzarella
Eggplant Pizzas