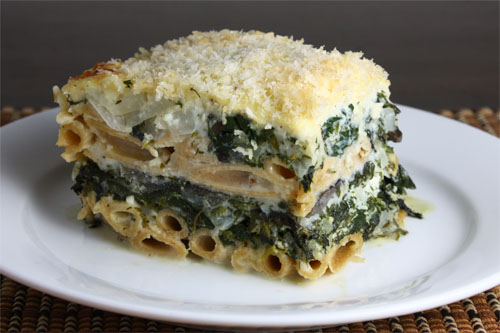 Another dish that I saw a lot in Greece was pastitsio. Pastitsio is a Greek layered baked pasta dish that is similar to a lasagna though instead of using flat noodles it uses long tubular noodles. The pastitsio that I saw in Greece was all made with layers of a meat sauce along with the layers of pasta and covered with a layer of bechamel sauce. When I got back the first place that I looked for a recipe for pastitsio was in my collection of bookmarks and I had this recipe for a pastitsio with greens from Mediterranean Cooking In Alaska bookmarked. This “greens” version is made with layers of green leafed vegetables like spinach and chard instead of a meat sauce. Although I had been looking forward to trying a pastitsio with a meat sauce with a touch of cinnamon in it my current obsession with chard made this version irresistible. With the dill and feta in addition to the spinach and chard this recipe seems a lot like a pasta version of a spinach pie.
Normally I like to write that a recipe was quick and simple but this one actually took a bit of time and effort. You have to cook the pasta, wilt the spinach and chard, mix the filling, make the bechamel sauce, assemble and then bake it. It is not difficult but it does require a bit of effort and it dirties a lot of dishes. I did run into one problem with this recipe and that was that there was simply too much to fit into the baking pan. It was not too much of a problem as I ended up with nice and thick layers of greens, just the way that I wanted it. The pastitsio with greens turned out great! I liked everything about it from the crispy panko topping to the creamy bechamel sauce to the thick layers of greens all sandwiched between thin layers of whole wheat pasta. Dill is one of my favorite herbs and it really made this dish amazing. All said and done, this pastitsio with greens may have been a bit of work and clean up but it was so worth it!
Note: I had to let it cool for a long time to be able to cut the nice straight edges for the slice in the photo.