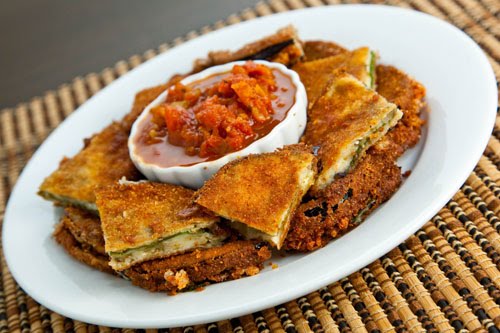 In addition to the field tomatoes the eggplants or aubergines are also in season. Each time I walk by them in the farmers market they seem to call my name and since I have a nice long list of eggplant recipes to try so I picked some up. The first on my to try list was these fried eggplant appetizers from The Culinary Chase that I had bookmarked a long time ago and I had been waiting for eggplant season to return to try. These appetizers are basically two thinly sliced pieces of eggplant that sandwich a thin slice of fresh mozzarella and leaf of basil. The eggplant and mozzarella sandwiches are then breaded and fried until golden brown and crispy. I am not so great at cutting things uniformly and thinly so I pulled out my mandolin and it did a great job of it. Eggplants can sometimes be bitter so it is always a good idea to salt them to draw out the bitterness, though make sure that you don’t forget to rinse the salt off. The fried mozzarella eggplant sandwiches were pretty easy to assemble and the most challenging part was the deep frying. They came out nice and golden brown and crispy on the outside and were and soft and gooey on the inside. I really liked the fact that the exposed mozzarella around the edges also fried up nice an crispy ans it is hard to beat crispy fried cheese! I served the fried eggplant with a tasty roasted tomato version of a simple tomato sauce though there are a lot of tasty tomato sauces that would go really well with this fried eggplant.

Fried Eggplant and Mozzarella with a Roasted Marinara Dipping Sauce