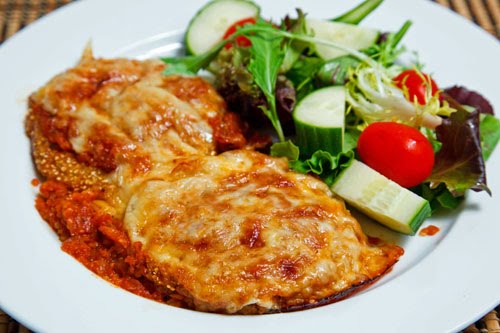 When I was at the farmers on the weekend I came across some green tomatoes which was perfect as I had just seen a recipe for a fried green tomato parmesan on Christies Corner that I had wanted to try. I like fried green tomatoes and I like a nice eggplant parmesan and I really liked the sound of combining the two. How could you go wrong with crispy fried tangy green tomatoes smothered in a tasty tomato sauce and drowned in melted cheese? Luckily I had some frozen marinara sauce that I had made earlier so the fried green tomato parmesan was as easy as frying the tomatoes, covering them with the marinara sauce and cheese and baking it all until the cheese was nice and melted and golden brown. The tangy fried green tomatoes worked really well in the parmesan dish and I liked the texture that the corn meal crust added to the dish. I wonder what other things can be used in ‘parmesan’ dishes like this? I am going to have to do some experimenting.