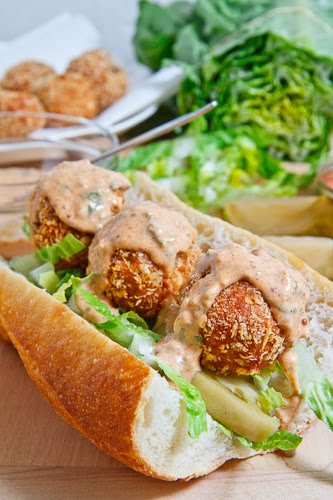 I have really been into the po’boy sandwich ever since I discovered them not too long ago. One of the things that I like about po’boy sandwich is that there are a lot of different ways of making them and my favourite up until now has been the spicy shrimp po’boy with remoulade sauce. I recently came across a new interpretation of the sandwich in the form of a fried tuna ball po’boy on Eatin’ on the Cheap and I just had to try it! In essence this is just a simple tuna salad that is formed into a ball, fried until nice and golden brown and crispy and then thrown into a sandwich along with a tasty remoulade sauce. It is hard to go wrong with deep frying and these tuna balls are addictively good with their crispy outsides and their soft, warm and tasty insides. I finished the sandwiches off with some crisp and tangy homemade pickled green tomatoes . I now have a new favourite po’boy sandwich and I am already looking forward to making them again sometime soon!