With my pickled carrots and daikon radish made I was ready to move onto making the banh mi sandwiches. A Bánh mì sandwich is a Vietnamese sandwich typically consisting of the pickles, cucumbers, cilantro, chilies, pâté, mayonnaise and a meat all wrapped up in a baguette made from both wheat and rice flour. Other than skipping the pate and using an all wheat baguette, I wanted to keep my sandwiches as traditional as possible which meant that the only real decision left was what meat to use. Well, that wasn’t much of a decision either given that it was a shrimp sandwich what inspired me to make the banh mi sandwiches in the first place and I was still craving that shrimp sandwich! Of course, I could not simply saute or grill some shrimp and throw them into the sandwich because I would be missing out on the opportunity to add some flavour and I knew just how I wanted to do it. I am a huge fan of savoury Vietnamese caramel dishes and one of my favorites is the Vietnamese caramel shrimp, or tom rim , and I figured that the sweet and salty caramel shrimp would be perfect in the banh mi sandwich. 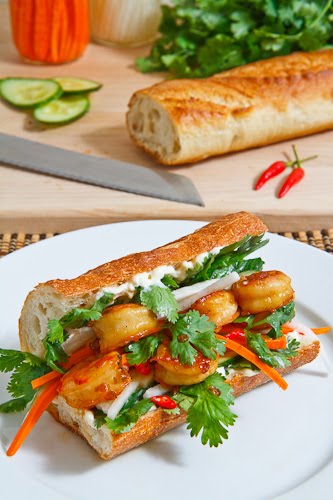 The banhmi sandwiches are pretty easy to make once you have the pickles ready and all you really need to do is quickly cook the shrimp and assemble the sandwiches. You just have to like it when something so easy to make is so wonderfully good! The flavour combinations in the banh mi sandwiches are simply amazing! The succulent, sweet and salty shrimp were delightful with the creamy mayo and both went well with the tangy pickles. The juicy cucumbers cleansed your palate in between bites leaving you ready for more and the cilantro added a particularly nice freshness reminding you of summer and really taking the sandwich home. The only problem that I had with these sandwiches was trying to resist having seconds right away! 🙂