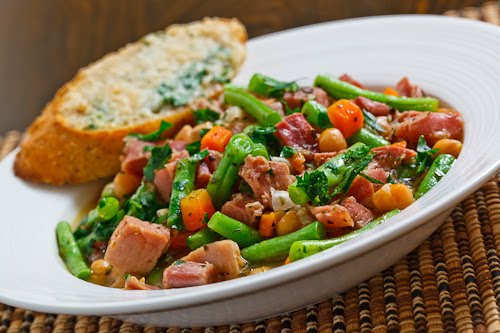 One thing that I always like to do with leftover ham is to make a soup as it adds a ton of flavour to soups. If you got your ham with the bone in you can toss it into the soup and it will add even more flavour. The ham bone freezes well so if you do not plan on making a ham soup right away you can easily freeze it until needed. (You can also use the ham bone to make a tasty ham stock that can be used in other soups.) To the tasty ham broth and diced ham I like to add a bunch of vegetables starting with some classic soup vegetables including onions, carrots and celery and from there I often add another green vegetable such as green beans or spinach to make it a bit healthier. To make the soup a little more hearty I add some legumes and chickpeas, lentils or pretty much any bean works well here. After you have done all of your chopping and dicing you can pretty much just sit back and let the soup simmer away. It is better to let a ham soup simmer for a long while to bring out all of the ham flavours but if you are in a hurry you can cut the cooking time short. I like a chunky soup so I do not use as much broth and this ham and chickpea turned out nice and chunky and full of flavour! I served the soup with some toasted cheesy garlic bread which was perfect for soaking up that last bit of broth at the bottom of the bowl.