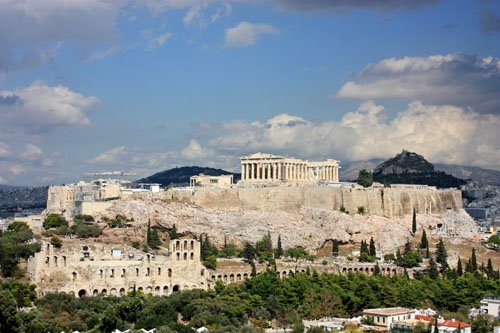 I had a great time in Greece! It was nice and warm and sunny most of the time though it did rain a few days. I saw lots of ruins and monuments and I did all of the touristy things. Most importantly I ate lots and lots of great Greek food! I got to try all of my favorite Greek dishes and a few new ones. Unfortunately it seems that I was more interested in enjoying the food than in taking pictures of it and I did not end up with many food photos…

One of the first dishes that I tried was a simple Greek salad. Boy, was I surprised when they set the bowl down in front of me and there was this absolutely massive slab of feta on top! It was a great salad and I enjoyed many more like it over the next few days. One thing that I noticed while in Greek was that the tomatoes were always perfectly ripe and full of flavour.

Of course I could not go to Greece and not eat a gyro or six. I had some that were amazing and some that were not so good. Sometimes they were served like I have always had them, wrapped in the pita, but other times they were served separately on a plate with sliced pitas instead of wrapped. One that I had that I really liked had red peppers layered in with the meat on the rotisserie and they were effectively roasted as the meat cooked. This gave the gyros an extra kick of flavour.

While I was in Greece I came across a lot of pastry shops and I found it hard not to go into each one and come out with an arm full of baklava. In the end I ate a lot of baklava and I enjoyed every bite of it, though I think I might be a bit baklava’d out for a while. 🙂

I was lucky to be in Greece just at the end of the fig season and I was able to pick up some fresh ripe figs. The figs were as big as a small fist and so full of flavour! The figs that I can get locally are pretty small and they usually only have a touch of flavour. I enjoyed snacking on about 2kg’s of figs while I was there. I also saw some fig yogurt in a grocery store that looked really good though I did not get a chance to try it.

While I was in Meteora I visited one of the monasteries on the cliffs. As I walked into the monastery there was this amazing smell of oregano. They were selling some oregano that they grew right there in the monastery. The oregano filled the room with its amazing fragrance and I immediately purchased some. My entire suitcase and everything in it smelled like oregano by the time I got home. I can’t wait to try using it!

I tried eating a few meals that where there were several mezes or appetizers that included things like eggplant salad, dolmades, saganaki, spanakopita, etc. These meals were quite nice as I got to try a few different dishes at a time.

I have always used tzatziki as a condiment and I was thus a bit surprised to see it served as a dish by itself. Given that tzatziki is so tasty and that I am used to eating fruity yogurt I quite enjoyed the cucumber and garlicky yogurt. It is always nice to find new ways to enjoy some of your favorite foods.

I also got the chance to enjoy moussaka several times and I even managed to get a hold of a few new moussaka recipes that I will have to try some time soon. All of the recipes seem to call for a layer of potatoes on the bottom which sounds nice and one called for a layer of zucchini.

Some other dishes that I got to try include: chicken avgolemono soup, stuffed cabbage, pasticio, etc.

While I was on Crete I got the chance to visit an olive farm and I got to see how they made some of their olive products. They had a donkey going in circles to grind the olives to get the olive oil, though I think that was more for show. I did end up picking up some olive oil and some nice looking olives, capers and honey while I was there.

On my last day in Athens I had some free time and I just walked around the area near the hotel. I came across a street that was full of vendors selling fresh fruits, vegetables, and fish that went on for blocks. There were a lot of vendors and each of them had a ton of fresh produce that was in season in Greece. It all looked so amazing. In amongst the fruits and vegetables were a few olive dealers and they had dozens of different varieties of olives. It is too bad that I could not read the Greek labels on all of those olives. It sure would have been nice to be able to sample them all.

Overall I had a great time. I did not even miss not having access to a computer or the internet or a tv for the duration of the trip. I did miss cooking though. I do not normally eat out and for the last few weeks I was eating out every meal of the day. I am looking forward to getting back to cooking and trying some new Greek dishes soon.

I have been rambling on long enough. It is time to start going through some of the many photos that I took in Greece. 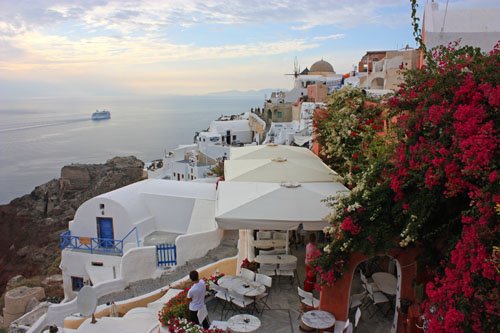