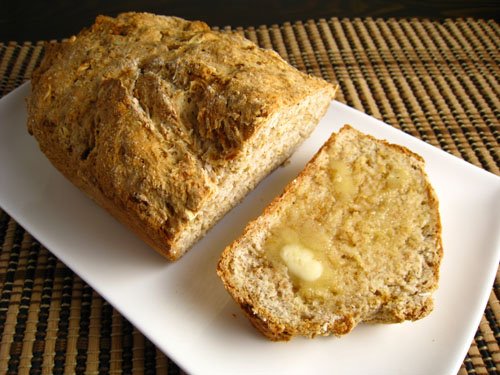 What better to go with Irish lamb stew on Saint Patrick’s Day than some Irish soda bread? Irish soda bread is a quick bread that uses baking soda rather than yeast. Traditional soda bread consists of only flour, baking soda, salt and buttermilk. The buttermilk reacts with the baking soda to produce carbon dioxide and thus rise. I decided to go with the brown soda bread which replaces half of the flour with whole wheat flour. I also decided to add some rolled oats for additional texture and flavour. I halved the recipe as I did not want to have too much in the way of leftovers. Soda bread would normally just be hand formed and baked on a baking sheet but I decided to put it into a loaf pan to give it a loaf shape. While looking for recipes I saw several that called for some non-traditional ingredients such as raisins, caraway seeds, etc.
The soda bread was the easiest bread that I have ever made. You just mix everything and bake it. It turned out pretty good. The crust was crispy and crunchy without being too hard and the inside was nice and soft and light. I timed it such that the bread came out of the oven at the same time that the stew was done so I got to have the bread while it was still warm from the oven. Of course I had to spread some butter on a few slices to melt into the bread. Melting butter on freshly baked bread is one of my favorite things. Given how easy this bread is to make it would be little trouble to make it for almost any meal.