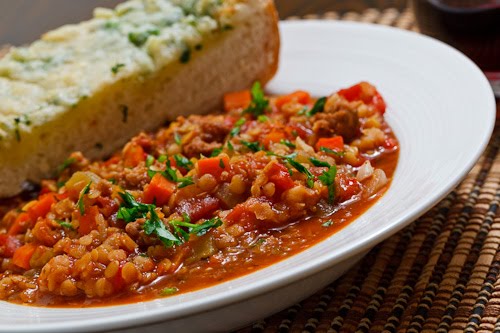 Last week while I was enjoying my lentil stew with Italian sausage and kale I noted how green it was. One thought led to another and the next thing that I was thinking about was red lentils and how a red lentil stew would be nice. Since I still had the remaining half a pound of the Italian sausage that needed to be finished the choice was easy to make. I started with the green lentil stew recipe and replaced the green de puy lentils with red lentils. From there I removed the green kale and replaced it with some tomatoes. I still have a freezer full of roasted red peppers from the fall and I could not resist adding a few of them for even more red. With that I had my red lentil stew recipe. Since I was planning on making some cheesy garlic bread to go with the stew, I threw the rind from that into the stew to add even more flavour. This stew was really easy to make with the hardest part being chopping all of the vegetables but it was well worth the effort! The roasted red peppers went really well with the Italian sausage and red lentils and they really added a ton of flavour to the stew. Although the same amount of red lentils as de puy lentils did not make as predominant a showing in this stew, the red lentil version was definitely tastier!