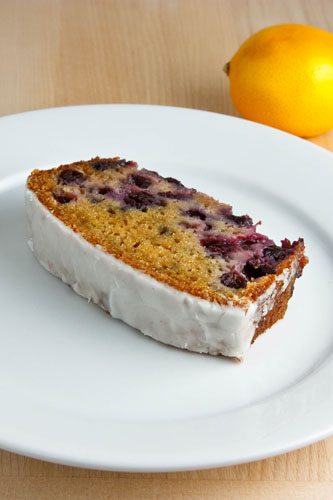 I had been seeing a few lemon yogurt cakes around that looked good and I was thinking that the rest of my meyer lemons would go well in one. Recently I have been trying to clear some space in my freezer and I came across some blueberries that I had frozen in the summer. I really like the lemon and blueberry flavour combo and I could not resist adding the blueberries to the lemon yogurt cake. With he cake down the only thing that was left was the topping. I was thinking about going with a simple lemon glaze when I came across a bookmark for a lemon blueberry cake with a limoncello glaze on Dragon’s Kitchen that sounded great! The lemon yogurt cake with blueberries was really easy to make, though it took a bit longer than I expected. (I think that was because I used still frozen blueberries.) The toothpick test worked and the cake came out perfectly baked even though it took a little longer. The cake was nice and light fluffy and moist and infused with blueberry and lemony goodness! The limoncello added a really nice zing to the lemon glaze that finished the cake off nicely. I think that I will be having this cake for breakfasts for the rest of the week and I am certainly looking forward to them. 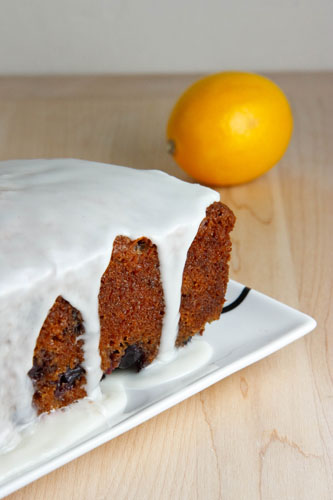