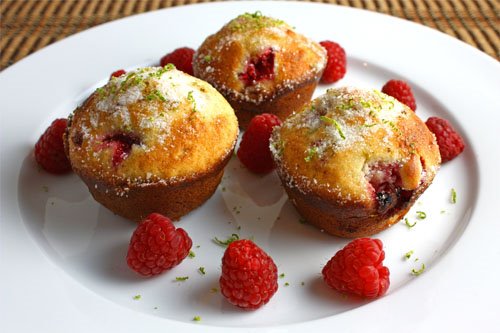 It had been a long time since I last made muffins and I had been seeing some nice ones around the food blogging sphere. Elle from Elle’s New England Kitchen recently made some blueberry and lemon and raspberry and lime muffins that caught my attention. Although blueberry and lemon is one of my favorite combinations for muffins it was the raspberry and lime ones that I was most interested in. I had not tried the raspberry and lime combo and it sounded like another good one. The locally grown raspberries had been looking good lately and it was time to try the muffins. The raspberry and lime muffins turned out good! The were nice and light and moist and the pockets of raspberries in the middle were wonderful. I really liked the raspberry and lime flavour combination. With all of the fresh berries around I am looking forward to making more muffins.
When making a blueberry and lemon coffeecake I like to pour sweetened lemon juice over the coffeecake followed by some sugar after it is done baking. I then pop it under the broiler until the sugar bubbles. This infuses the coffeecake with more moist lemony goodness and the melted sugar forms a crispy layer on top which is really nice. I used the same method with lime juice for these raspberry and lime muffins. Unfortunately it did not work out as well as I had hoped with the muffins. The muffins were starting to look too dark before all of the sugar on the top had melted and I had to pull them out of the oven. Oh well, the partially melted sugar topping was still really good. Next time I will have to pull the muffins out of the oven a little earlier before adding the topping. 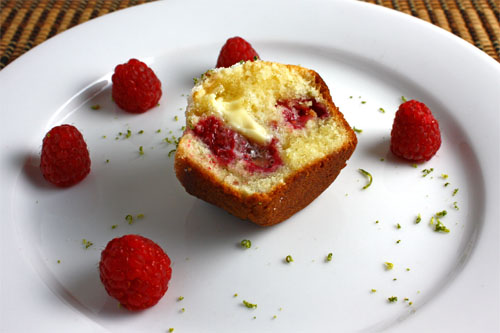