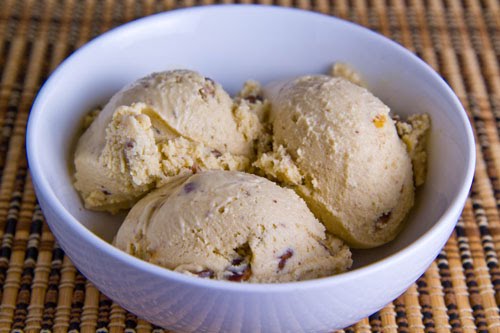 I served a sweet potato pecan pie to finish off my Thanksgiving dinner this year. The fact that the pie was already composed of two already great pies was not enough and I tried to make dessert even better by topping it off with some ice cream. At first I was thinking just some simple vanilla ice cream would do and then I thought; Why stop there? I could make it a maple ice cream and it would be including some of the flavours from the pie that it would be topping. Thinking of working similar flavours into the ice cream my next thought was to add some pecans because nuts always go well in ice cream. I had finally arrived at a maple pecan ice cream which sounded really good.
There was just one last thing to add to the ice cream, a splash of bourbon. I like to add a touch of alcohol to my homemade ice creams as it helps to keep the ice cream from freezing into a solid brick. The consistency of the ice cream straight from the freezer is always nice with the alcohol and there is no need to wait for the ice cream to start to thaw out before eating it. Since I was also including a splash of bourbon in the pie it was the natural choice for the ice cream in this case.
For the base of the ice cream I used a pretty standard combo of milk, cream and eggs and the maple syrup provided all of the sweetness without the need for extra sugar. I toasted the pecans in some butter and brown sugar to ‘candy’ them before adding them to the ice cream. Other than candying the pecans this ice cream was a pretty standard ice cream and thus really easy to make. You pretty much just make the custard, chill it and then throw it into your ice cream maker. The maple pecan ice cream turned out so well! If you like maple then this ice cream will be the perfect treat! The maple flavour came through nice an strong and the candied pecans provided a great texture and flavour. One of the things that I liked most about the ice cream was that I could make it the day before and not add to the load on the day of the big meal. I will definitely be making this ice cream again and again.