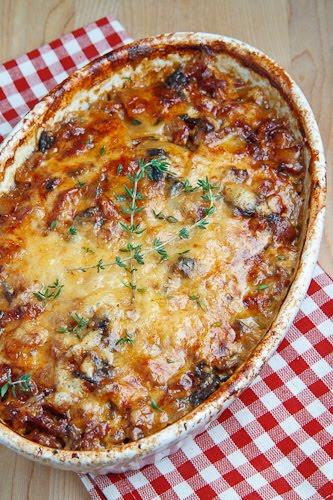 The next dish in my Thanksgiving dinner was not the prettiest dish but it may just have been the tastiest one! This potato gratin was inspired by a recipe that appeared in Food & Drink last year that I had just been itching to try it. Potatoes in pretty much any form have to be one of my favourite comfort foods and when you bake them until tender in a creamy cheese sauce like this you really cannot go wrong. Even though a plain old potato gratin is irresistibly addictive this recipe takes things way beyond by adding tons of pure umami and flavour with pancetta and dried porcini mushrooms. Pancetta is an Italian form of bacon and it adds a nice saltiness and an amazing crispy texture that is hidden throughout the gratin. Dried porchini mushrooms are just packed with flavour which we extract by soaking them in hot water and then using both by sprinkling the mushrooms in the gratin and adding the water they were soaked in to the creamy sauce. Of course the final component of the grain is the cheese and for this one I used a gruyere that is sprinkled both in between layers of potatoes and on top. This tasty potato gratin certainly did disappear quickly!