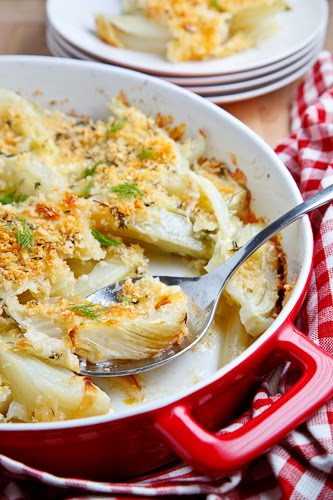 I particularly enjoy fennel but I hardly ever seem to use it and I was thinking that it would be perfect to pull some out for a special occasion like for Valentines day. Fennel bulbs have the flavour of star anise or black licorice that is fairly strong when raw but it mellows out really nicely when cooked. I had recently come across an interesting way of using some fennel, in a fennel gratin , on Simply Recipes and I simply could not resist the idea of covering some licorice-y fennel with cheese and baking it until it gets all bubbly and melted. Normally a gratin has a cheese sauce that starts with a bechamel sauce or a cream based sauce and I liked the fact that this recipe takes a pass on both of them and gets right to the cheese! Basically the fennel is blanched, placed in a baking pan, covered in mozzarella, topped with a parmesan bread crumb crust and baked. Despite being so simple this fennel gratin is quite amazing! The hint of the black licorice flavour remaining in the baked fennel pairs fantastically well with the savoury melted cheese and the crispy golden brown bread crumb topping adds a pleasant textural contrast. 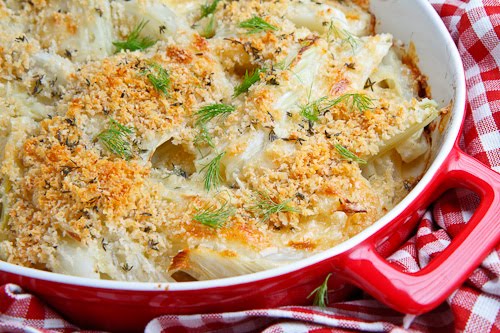 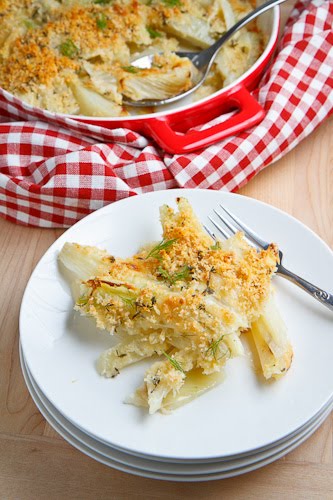