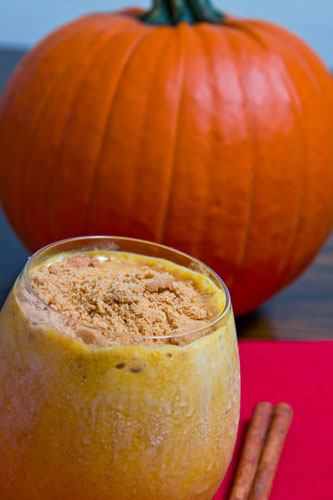 With pumpkins being in season I have been roasting them to make and freeze pumpkin puree for use later. By the end of the day my place was pretty hot from having the the oven on so much. While I was thinking about how warm my place was I remembered seeing this recipe for a pumpkin pie milkshake on Our Best Bites that sounded like the perfect way to beet the heat and enjoy some of the freshly pureed pumpkin. With the pumpkin puree, pumpkin pie spices and the brown sugar, this drink is pretty much just a pumpkin pie in milkshake form. There is even a graham cracker garnish to remind you of the pies crust.
For the most part I left the original recipe as it was though, I did replace the vanilla ice cream with frozen vanilla yogurt and I garnished the milkshake with crumbled gingersnaps rather than graham crackers. This milkshake was literally as easy to make as throwing the ingredients together and blending. You can easily control the consistency of the shake by changing the amount of milk that you use. If you like a really thick shake, only use just enough milk that the ice cream or frozen yogurt will puree in the bender. If you like a thinner shake then you just need to add some more milk. The pumpkin pie milkshake was so good! It was nice and thick and the pumpkin pie flavours came through really well. It was a great seasonal treat and it was nice and refreshing after having the oven on all day long. I know that I will be enjoying a few more of these shakes while I still have some pumpkin puree on hand!