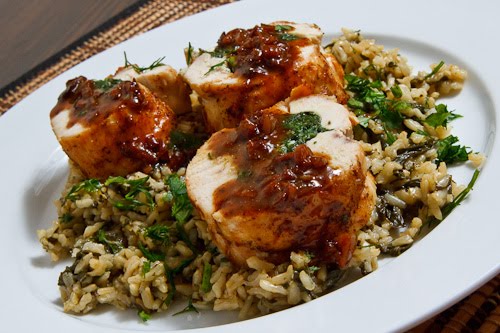 It seems that the spinach and feta quesadillas that I made last week simply wet my appetite for my craving for the Greek spinach and feta flavour combo. Next up on my list of things to try using this flavour combo was something a bit more challenging, chicken breasts stuffed with spinach and feta. I don’t make stuffed meat dishes like this too often as they can be a bit tricky to make and I sometimes end up with most of the stuffing squeezing out before it is finished cooking but this time the reward was worth the risk. I started out looking at the filling and I went with the standard spinach, feta, dill, parsley and green onions found in spanakopita. Ricotta is an ingredient that can be used in a spanakopita filling that I tend to skip but in this case I was thinking that it would help hold everything together. I was unable to find any butchers twine to hold my stuffed chicken together so I used some flavourless, unwaxed dental floss which worked out pretty well.
With my chicken stuffed and all wrapped up, I seasoned it a threw it into into a pan with some oil and browned it up. After getting the outside nice and brown I transferred the stuffed chicken breasts to a baking dish and finished cooking them in the oven. At this point the pan that I had just cooked the chicken in was filled with those brown bits of pure flavour and I could not let them go to waste! I deglazed my pan with a splash of wine and used those brown bits to make a simple pan sauce which I finished with a bit of cream and some of the leftover dill and parsley that I had on hand.
The spinach and feta stuffed chicken with pan sauce turned out so amazingly well! Luckily this time I did a pretty good job of tying the chicken breasts up and they held together with hardly any of the stuffing coming out. The chicken was nice and juicy and spinach and feta stuffing was just what I had been craving. The pan sauce, despite being so simple, was so full of flavour and it really brought the meal home! I served the spinach and feta stuffed on a bed of spanakorizo a Greek spinach rice to get even more spinachy goodness.