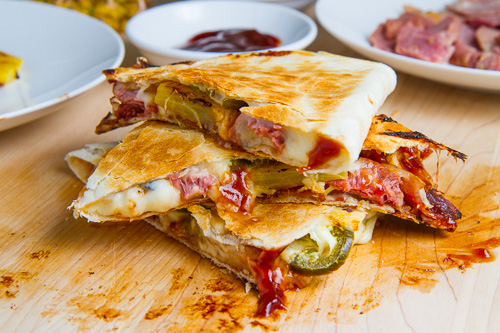 Ham and pineapple quesadillas inspired by the flavours of a BBQ ‘Hawaiian’ pizza with bacon, jalapenos and plenty of melted cheese!

During the summer I naturally tend to eat a lot more fruit and I often like to try to use it in one of my food obsessions, dishes with plenty of hot melted ooey gooey cheese like grilled cheese sandwiches or quesadillas . I have been enjoying a lot of pineapple these last few days and that had me thinking about fun new ways to use it and the one idea that really stuck with me was to use it in another pizza quesadilla ! Hawaiian pizza is one of those pizzas where you either love it or hate it with its use of sweet and tangy pineapple on a pizza along with salty ham and smoky bacon and I am firmly in the love it category so Hawaiian pizza quesadillas were on the menu!
A Hawaiian pizza quesadilla recipe pretty much writes itself, I mean you just take the Hawaiian pizza ingredients, throw them into a tortilla and toast them up until all melty and good but that just wasn’t quite doing it for me… Although I do not hold to it all the time, I feel that a quesadilla should include some spicy heat and the basic Hawaiian pizza quesadilla was simply lacking in this regard! After some careful consideration I decided that the best way to add some heat to the quesadillas was take a note from the BBQ chicken pizza to replace the boring old pizza sauce with some sweet and spicy BBQ sauce and I also threw in some jalapeno peppers for good measure! The use of the BBQ sauce in the quesadillas put grilling on my mind so I grilled the pineapple to tenderize and caramelize it, bringing out its natural sweetness.
Isn’t summer great? Fresh fruit? Check! Plenty of ooey gooey melted cheese? Check! Mmm… 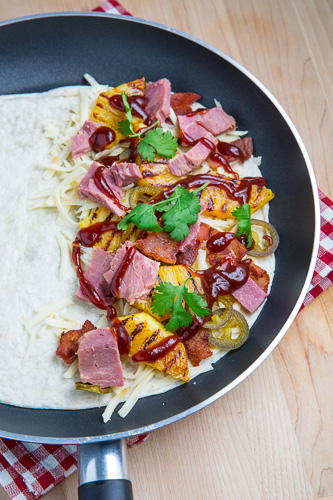 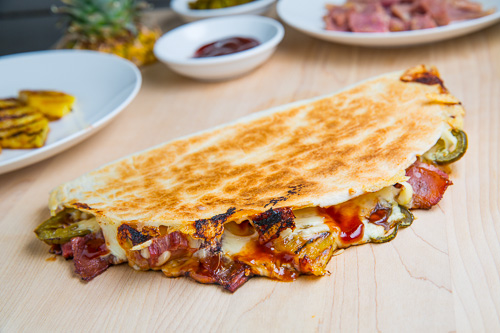 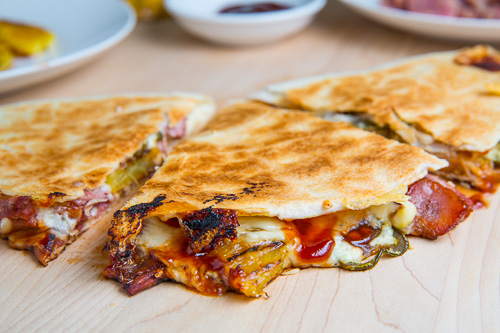 These quesadillas are almost a half an inch thick making for one nice and tall stack of ooey gooey dripping goodness! 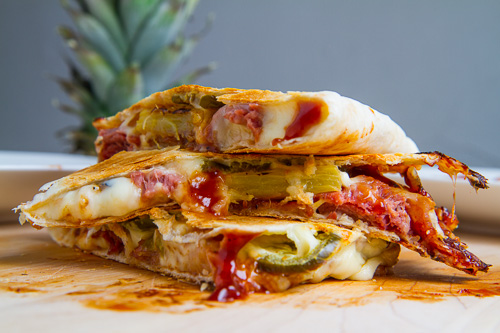 Ham and pineapple quesadillas inspired by the flavours of a BBQ ‘Hawaiian’ pizza with bacon, jalapenos and plenty of melted cheese!