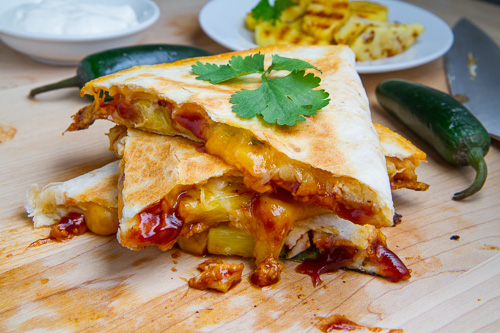 Sweet and spicy BBQ chicken and juicy and tangy pineapple quesadillas filled with spicy jalapenos and plenty of melted cheese!

Pineapple was cheap the other week so I picked some up on a whim and although I was enjoying eating it as is, I couldn’t help but think of using some of it in a recipe. For those of you that have been following for a while, you will not be surprised that one of my first ideas was using it in a grilled cheese sandwich , though as it happened I was out of bread but I did have some extra tortillas that needed using and so quesadillas it was! With all of the cold weather lately I have been dreaming about warmer days and the BBQ chicken and pineapple flavour combo was sounding really good for a cheesy quesadilla, along with some spicy jalapenos for extra heat of course. If it were warmer out I would fire up the grill, grill some chicken and slather it with BBQ sauce but since that was not viable I went with the simpler leftover shredded chicken option, which also happens to be much quicker to implement. I have to say that the combo of the sweet and spicy BBQ chicken and juicy and tangy pineapple was a fabulous one! The ooey gooey cheesy quesadillas were pretty amazing and certainly did remind me warmer days; a perfect way to enjoy that pineapple! 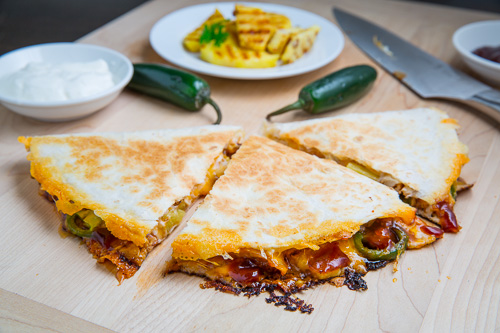 A new quesadilla shot; the open uncooked ingredient shot! Don’t worry more cheese was heaped on top of all of that before the tortilla was folded over to make the quesadilla! 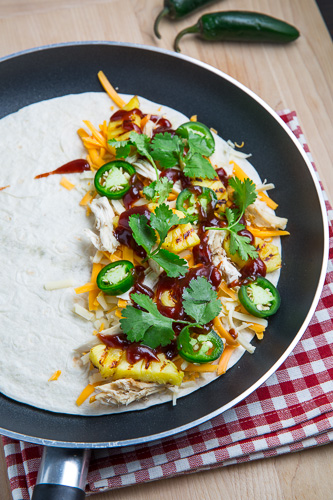 Just look at all of that amazing melted cheese, BBQ chicken, pineapple and jalapenos! Those bits of burnt cheese that melted out of the sides of the quesadilla are obviously the best part! 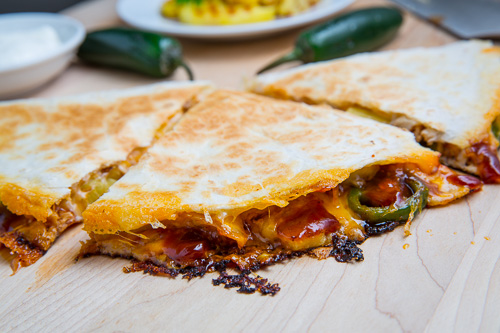 Sweet and spicy BBQ chicken and juicy and tangy pineapple quesadillas filled with spicy jalapenos and plenty of melted cheese!