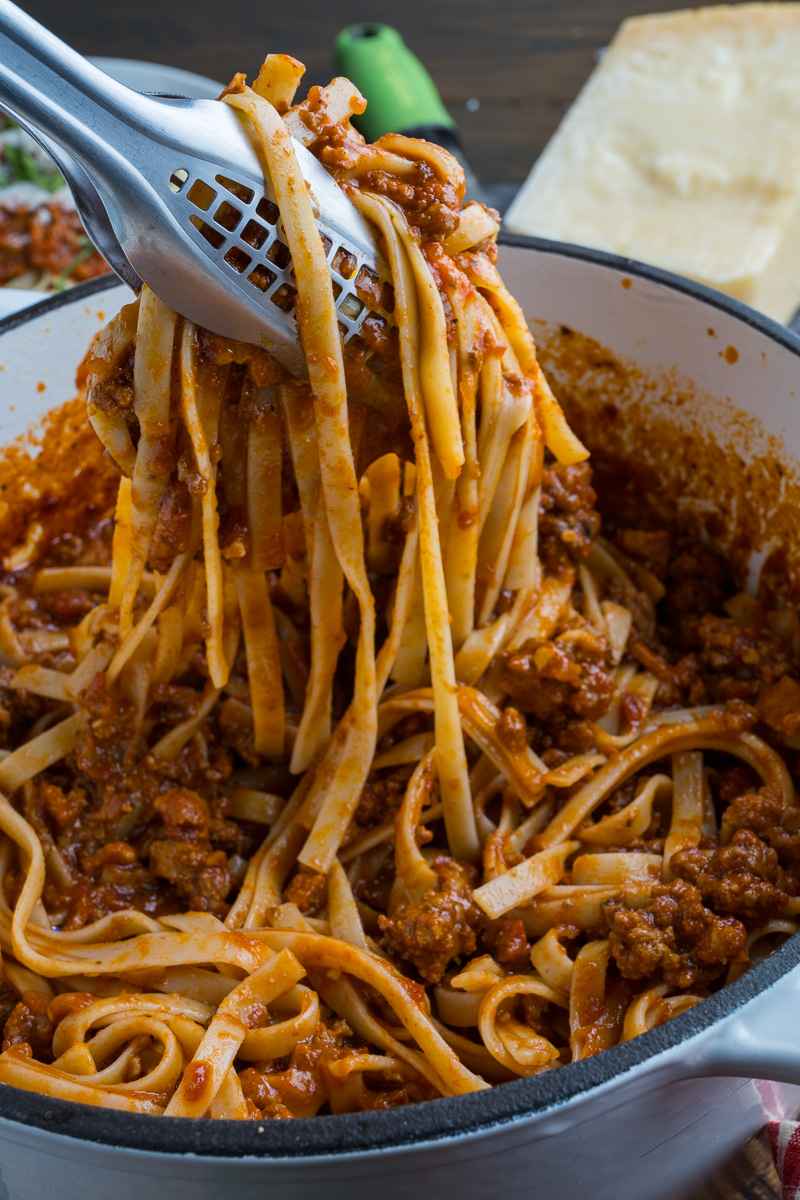 One of my favourite meals growing up was spaghetti bolognese, though we didn’t call it that, it was just
spaghetti for short. It is basically spaghetti pasta topped with a meat sauce which is a variation of the bolognese sauce or an Italian ragù alla bolognese. Although I am still fond of the recipe that I grew up enjoying, this is the version that I find myself making more frequently, one that I have developed over the years. At it’s base, an authentic or traditional bolognese sauce is meat (often pork), onion, celery, carrot, tomatoes, wine and milk that is slowly simmered until the sauce has thickened the meat is melt in your mouth and the flavour has had plenty of time to come out and develop.
My version of bolognese is similar to the classic bolognese in that it starts out with meat, I like a combination of pancetta (or bacon) along with ground beef (or veal) and Italian pork sausage which starts us off with a ton of flavour. I also add the onions, celery and carrots along with garlic and red pepper flakes before adding the tomatoes, in the form of diced tomatoes and pureed tomatoes. If you are cooking with alcohol then add a glass of white wine and if not then a splash of balsamic vinegar is a nice substitute. Once you have the sauce made all that’s left it to slowly simmer it for a few hours. You could, if you are in a hurry, just cook it for a few minutes and serve it right away but you would be missing out on all of the flavour that simmering it for a few hours adds. I like to add a hit of umami flavour to my bolognese by adding some dried mushrooms and mixing some parmesan cheese right into the sauce along with the milk/cream! Another thing that I like to add is a splash of fish sauce at the end adds even more flavour.
Ragù alla bolognese is amazing server over pastas like fettuccine, spaghetti, linguine, tagliatelle, penne, etc. and as an ingredient in other recipes like lasagna. This sauce only gets better the next day so, if you are going to be simmering for a few hours anyways, make an extra large batch for a second meal later on in the week or store is in the freezer for a quick meal further down the road. 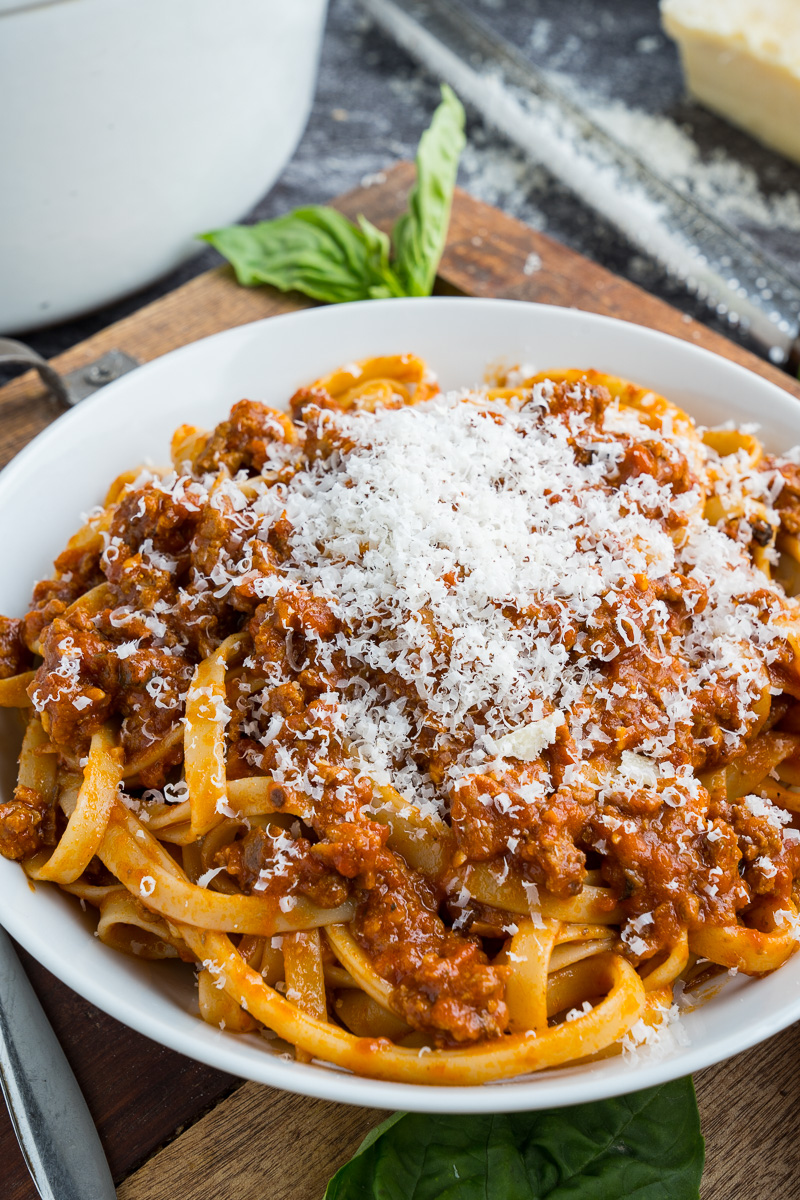 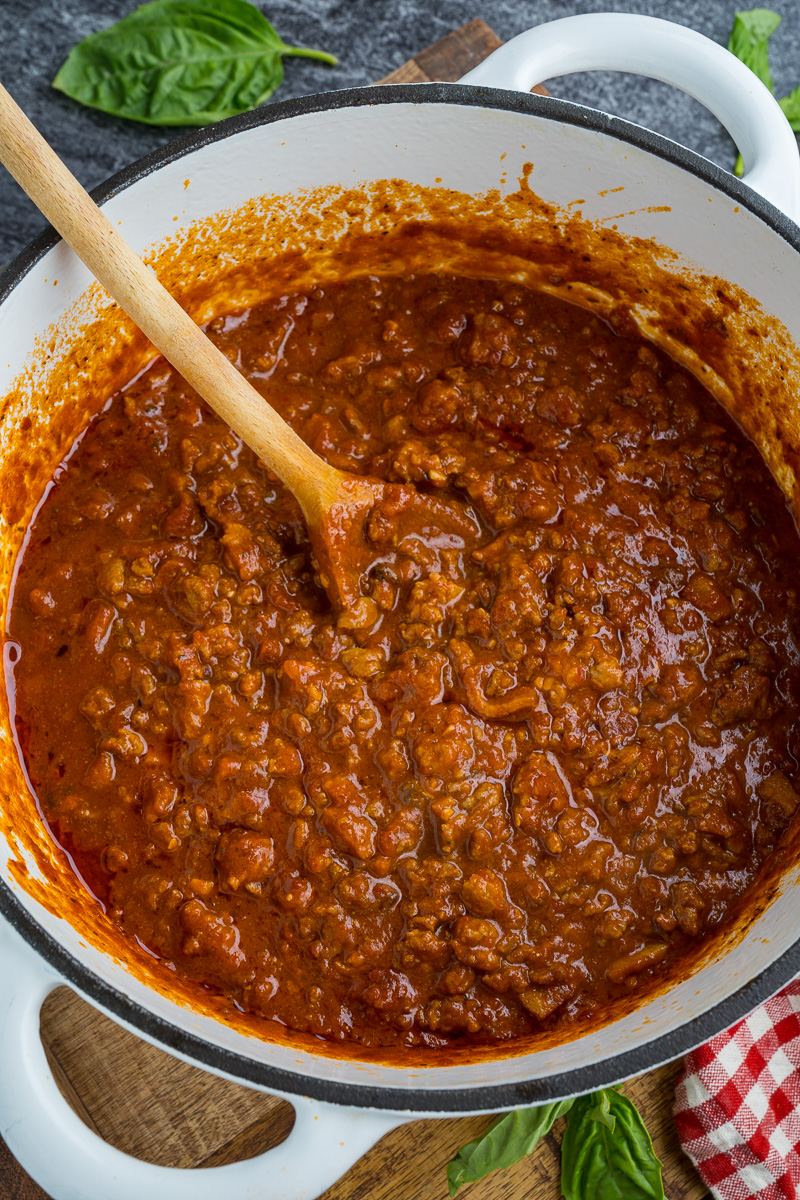 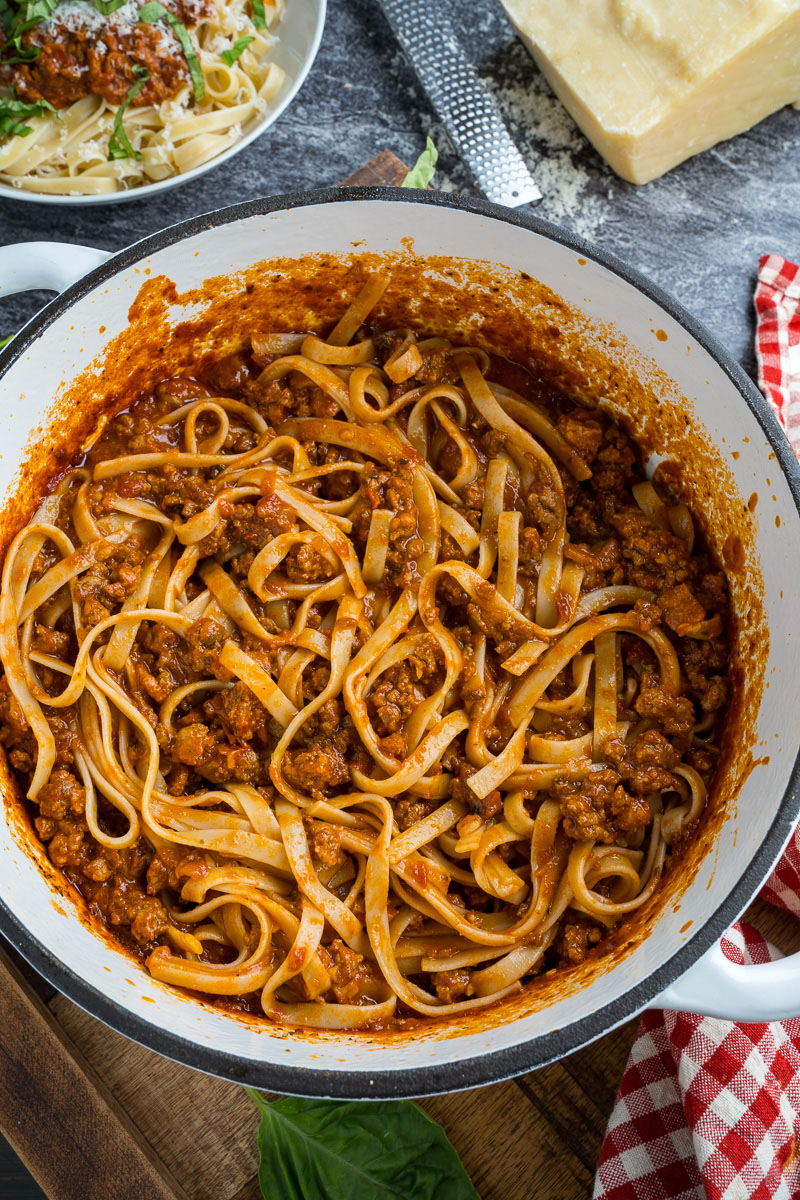 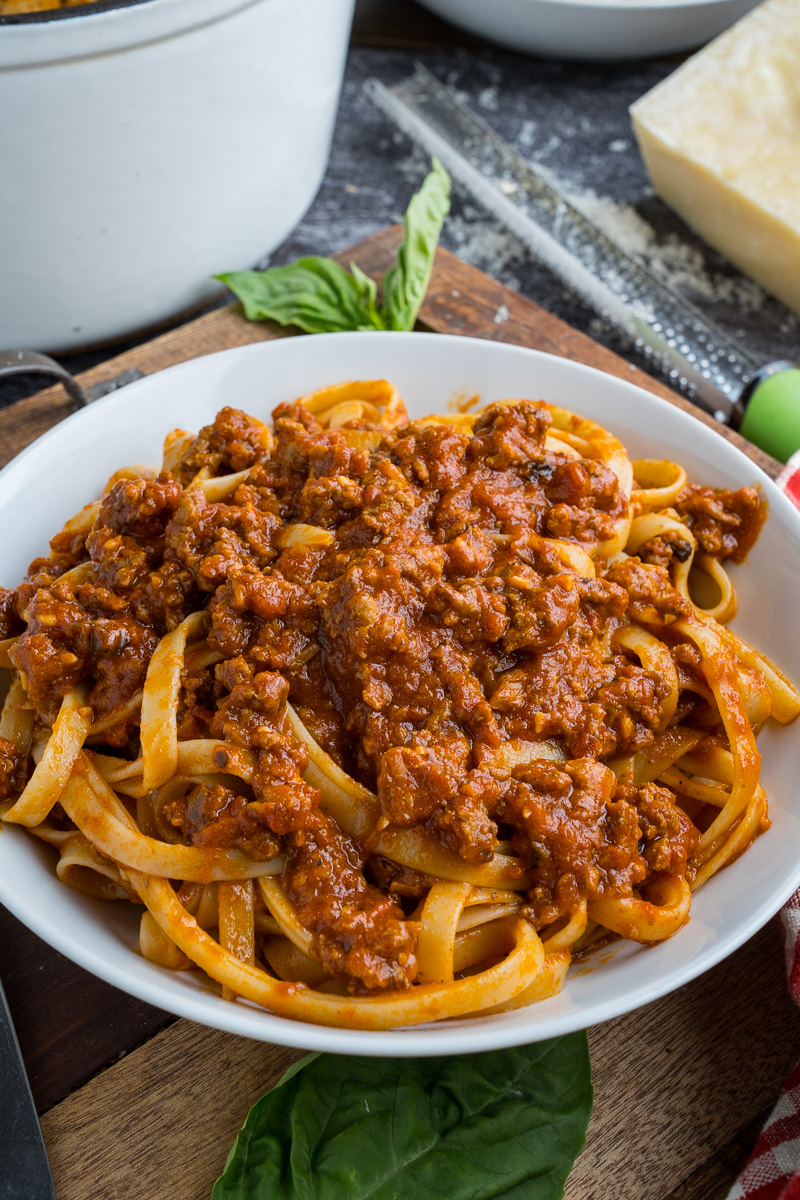 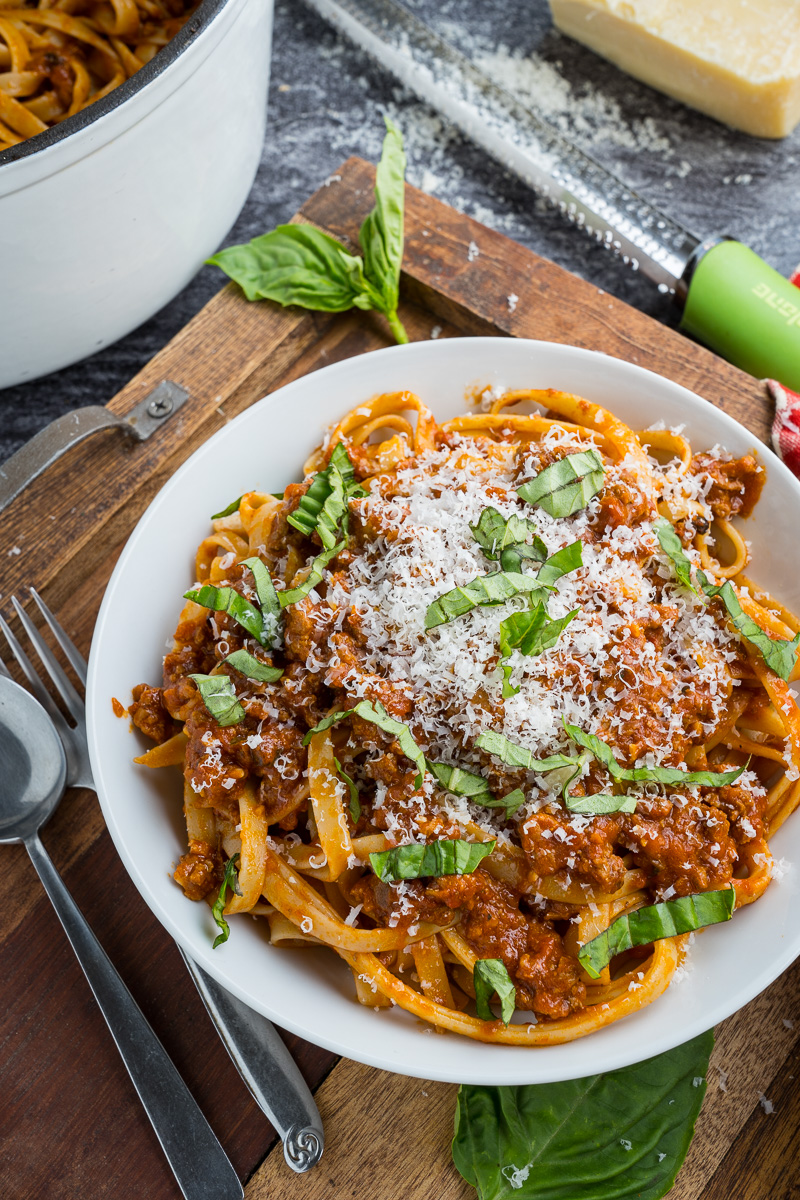 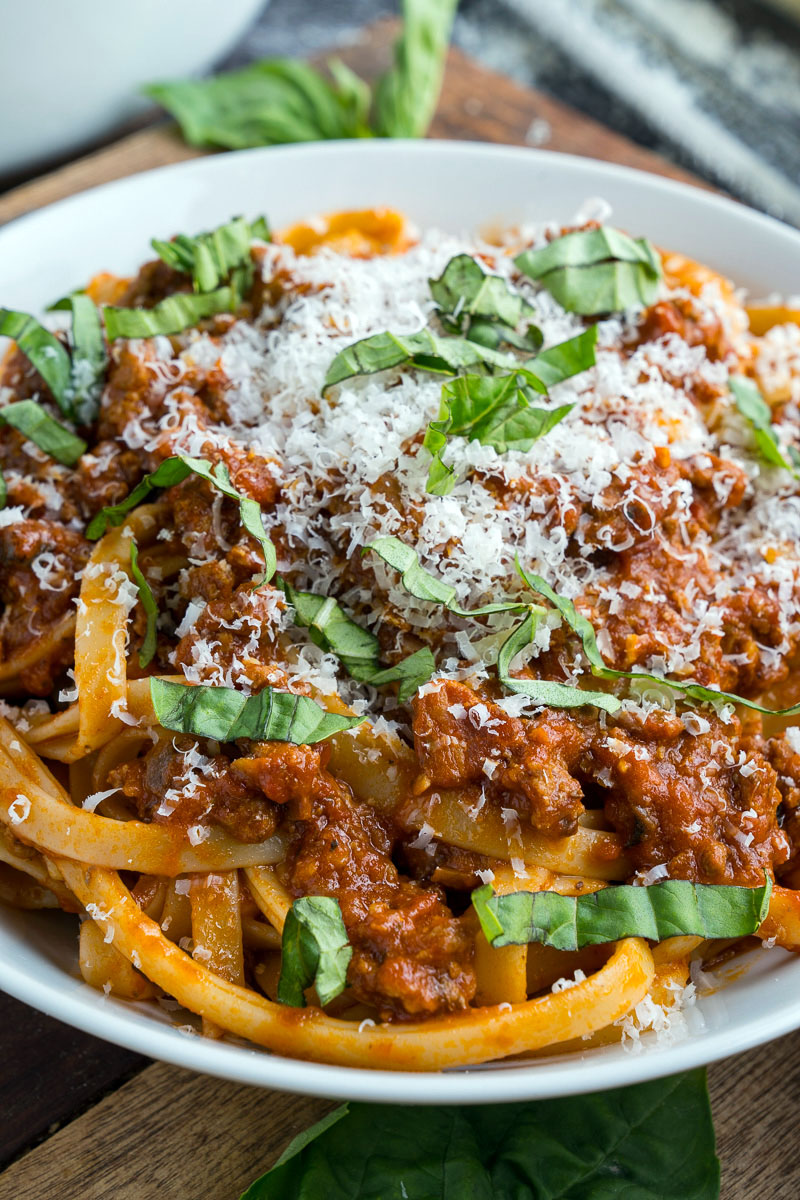 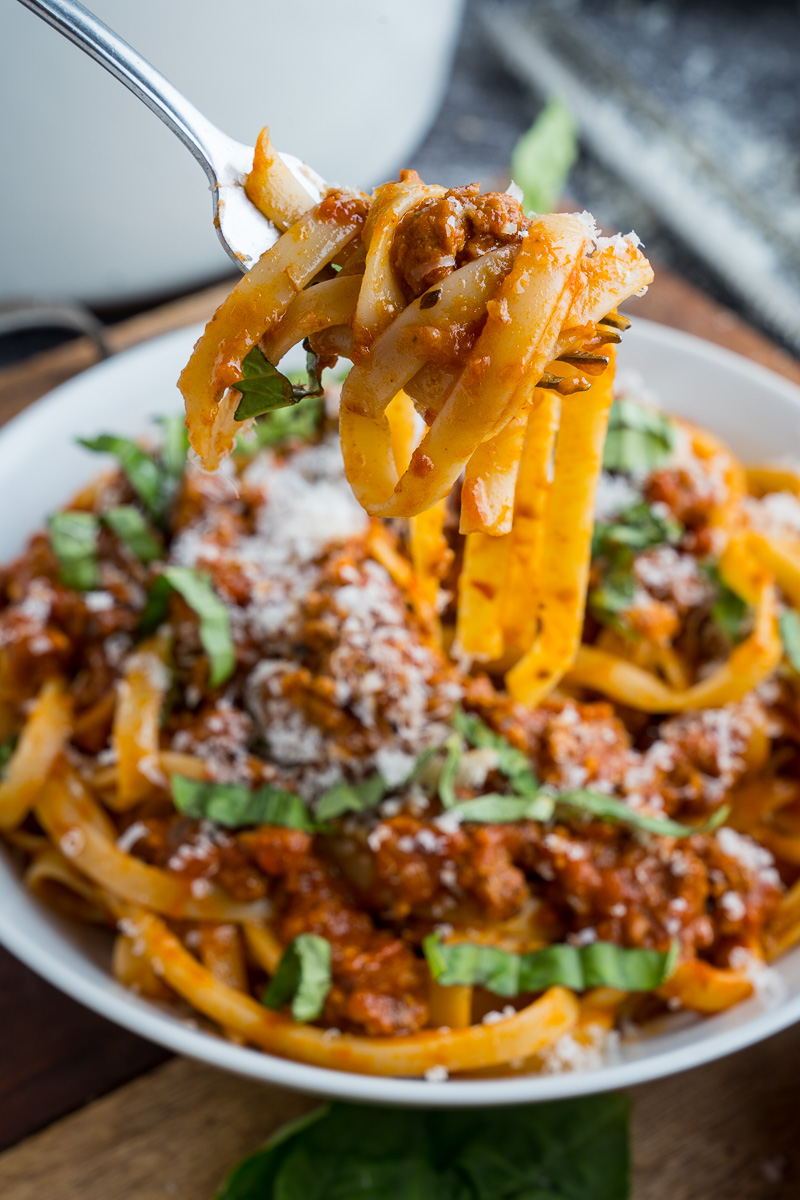 Tip: Pulse the onions, carrots, celery and oil to get a really fine dice where they will practically disappear from the sauce!
Option: Use any combination of ground beef/veal, ground pork, Italian sausage and pancetta/bacon totaling about 2 pounds. (If you omit the sausage, add 1/4 teaspoon ground fennel seeds along with the red pepper flakes.)
Option: Omit the carrots and celery.
Option: Add diced mushrooms.
Option: Throw a parmesan rind into the sauce while it simmers, removing it before sering, to add even more umami flavour!
Option: Use your favourite pasta such as spaghetti, linguine, tagliatelle, penne, etc.
Option: Replace the heavy cream with milk.
Option: Add a pinch of nutmeg.
Option: Add a slash of fish sauce juice before removing from heat for an umami kick!
Option: Add a slash of lemon juice before removing from heat.
Tip: This sauce freezes well so make a double batch and save half for later!
Note: THe sauce tastes even better the next day!
Nutrition Facts: Calories 564, Fat 43g (Saturated 15g, Trans 0.6g), Cholesterol 105mg, Sodium 646mg, Carbs 58g (Fiber 6g, Sugars 8g), Protein 30g
Nutrition by: