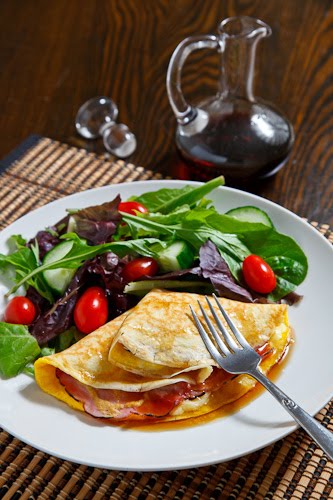 Thin light and fluffy crepes filled with egg, melted gruyere and ham folded and served with a touch of maple syrup; simply a magical combination of sweet and savoury

The other day I was perusing the menu of Liberty Belle Bistro , a restaurant near where I work and I noticed their Crepe Quebecois which immediately caught my attention. The crepes were described as containing ham, egg and gruyere and the crepe was finished off with maple syrup. I really liked the sound of the sweet and savoury combination of the crepes with the maple syrup and I just had to try making some at home!
Every time that I have made crepes in the past I fully cooked the crepes and then filled them later but these crepes contained an egg filling and cheese which ideally should be melted so I had to change my technique a little. For these crepes I cooked the batter until it started to set and then I added the egg, swirled it around so that it evenly coated the crepe, then I added the grated gruyere cheese and let it melt as the eggs set. Once the egg looked like it was almost set I added the ham and let it warm up a bit before removing the crepe from the pan to fold it up and plate it. The new crepe cooking technique worked out perfectly and I was able to get a cooked egg filling and melted cheese in the crepe without burning the crepe itself.
It has been a long time since I last made bacon and added maple syrup to the pan while it was frying but it is an absolutely amazing combination of sweet and savoury and as I took the first bite of these ham, egg and gruyere crepes topped with maple syrup I was immediately reminded of it. The salty ham, with the melted cheese for was delightful all wrapped up in a light and fluffy crepe and topped with maple syrup and I practically inhaled mine! I could not resist spreading a touch of dijon mustard onto the ham and the small bite that it added was particularly nice! Theses crepes certainly made for a fantastic weekend breakfast! 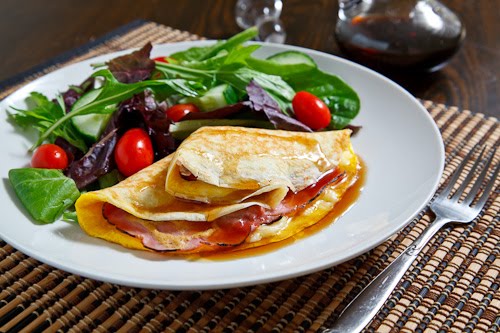 Thin light and fluffy crepes filled with egg, melted gruyere and ham folded and served with a touch of maple syrup; simply a magical combination of sweet and savoury