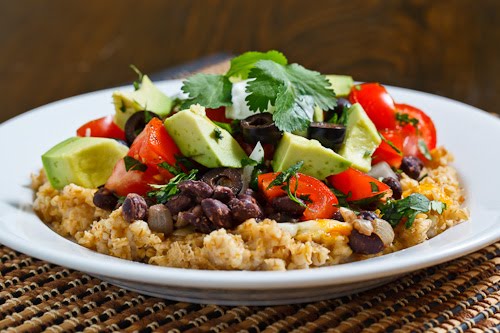 Despite the fact that it is supposed to be Spring already, it has still been pretty chilly around here so I have been enjoying oatmeal for breakfasts most mornings. Over the last few moths I have been having oatmeal for breakfast quite often and it is always in the form of a sweet porridge and I had always wanted to try a savoury dish with oatmeal. Not too long ago TasteSpotting did a feature on oatmeal that included a few savoury oatmeals which inspired me to try an oatmeal burrito bowl.
The basic idea of a burrito bowl is a deconstructed burrito served in a bowl. I normally start a burrito bowl off with a layer of rice and then top that with beans, pico de gallo and whatever other Texmex inspired ingredients that I desire. For the oatmeal burrito bowl I simply swapped the rice out for oatmeal and I used my favourite kind of oatmeal, steel cut oats, as they have a nice chewiness and more substance.
Normally I would just spinkle a bit of cheese on top but I wanted the cheese to be melted to I placed the oatmeal on an oven proof plate, topped it with cheese and threw it under the broiler until the cheese had melted. I was not really sure what to expect from the savoury oatmeal bowl, but it I was pleasantly surprised by the results. I really liked the way that the edges of the oatmeal that were exposed to the broiler got a little crispy and the crispy oatmeal and melted cheese combination was really nice. All of the fresh and juicy ingredients on top were a great counterbalance and rounded the whole dish off perfectly. I now think I have a new favourite way of enjoying oatmeal!