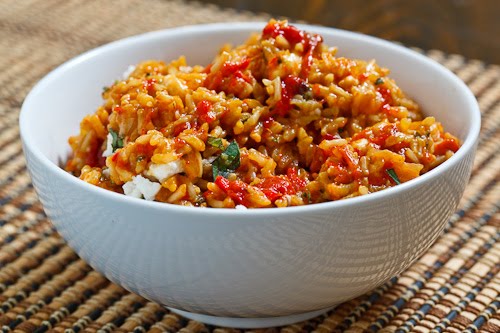 With springs produce coming soon I have been trying to clear my freezer of things that I froze last spring and summer to make some room for more. On top of my list of things to finish were the plethora of roasted red peppers. When the roasted red peppers were at their peak last year I got a big basket and roasted them, placed them individually into ziplock bags (with the charred skin still on) and tossed them into the freezer. They keep really well that way and you just thaw them out, pinch off the skin and you are good to go. While I was pulling a few of them out of the freezer I was wondering what to do with them and my eyes wandered and came to rest on a package of frozen spinach which immediatly made me think of spanakorizo, a Greek spinach rice) . My next thought of course was that of a roasted red pepper version! I wanted to keep things simple and continue with the Greek flavour theme which meant that I wanted at least one fresh herb and oregano sounded like the way to go. With that, I pretty much had my recipe though, I could not resist finishing it off with some feta. This is another one of those dishes where after a bit of up front work, you can pretty much just sit back and let it simmer away, unattended until it is done which makes it a great side dish. The roasted red pepper rice with feta turned out really well! It was nice and light and fluffy and full of the roasted red pepper and oregano flavours which are so good together. The feta had just started to melt into the rice making it nice and creamy and spread its salty flavour even more. I imagine that a risotto version of this rice would also work well.