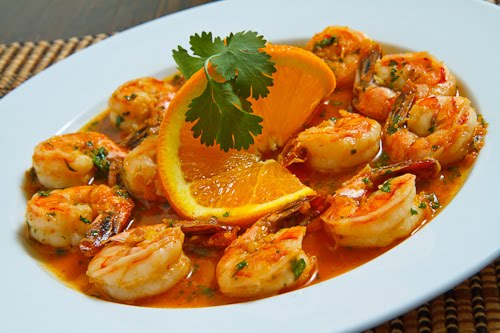 Last week when I made the fresh pea risotto with spicy grilled shrimp , I realized that it had been a while since I had done much of interest with shrimp and all of a sudden I was starting to feel shrimp withdrawal symptoms. Luckily I had just the idea to satisfy the cravings in the form of this spicy orange shrimp. I had been thinking about doing a shrimp dish with orange and some Asian flavours for a while and it was the perfect time to try it. I kept the recipe nice and simple with just a few basic ingredients. Oranges can have a fairly subtle flavour so the idea is to season the sauce without overpowering the flavours of the orange. Basically you want to balance the flavour of the orange with a bit of saltiness from the soy sauce, some tang from the vinegar, a touch of sweetness from the honey and some spicy chili heat. The net result is a dish of succulent shrimp covered in a sauce with the aroma and flavour of oranges that just dances on your tongue. I made these shrimp as more of an appetizer but you could easily turn this into a meal by adding a few vegetables and maybe some cashews and serving it on rice or noodles.