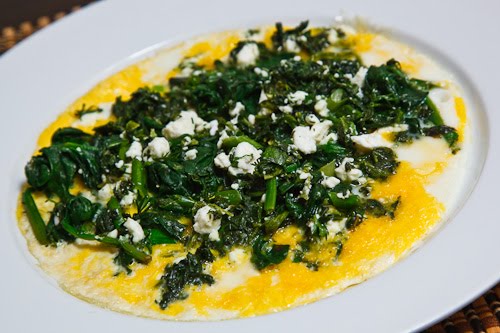 With all of the great omelettes that I have been enjoying lately, I just had to try one with my favorite spinach and feta flavour combo. I was first introduced to the spinach and feta flavour combo in spanakopita , a Greek spinach and feta pie, and I have been reinventing that flavour combo in different dishes ever since. Now it was time for an omelet version! I stuck pretty much with the basics from the spanakopita filling with the spinach, feta and fresh herbs including parsley, dill and mint along with some green onions. This time when cooking the omelette, I poured the eggs into the pan first and let them partially set before sprinkling on the spinach topping so that it would not all sink to the bottom. The spinach and feta omelette worked out even better than I had hoped for and it will definitely be on my regular rotation from now on. It is such a quick and tasty breakfast and as an added bonus it is pretty healthy as well.