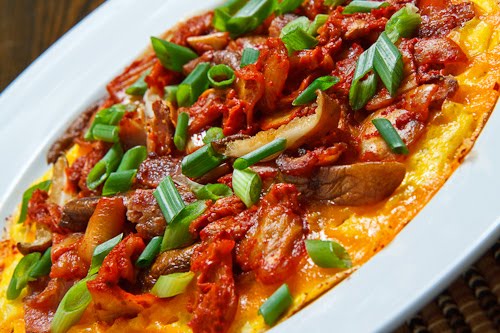 I have been enjoying some really great omelettes lately! The omelettes that I have been making have been packed with flavour and in fact with the ingredients in them they have been looking a lot more like pizzas. The thought of a pizza like omelette was perfect because the kimchi, bacon and shiitake mushroom pizza that I had made earlier in the week had disappeared way too quickly and I was left craving more. I immediatly set about drawing up a recipe and I started with the basic ingredients of the pizza.
The omelettes that I have been making have been one pan omelettes where I cooked the ingredients and then poured the eggs over them. I made sure that the ingredients in them were large enough to peak through the eggs when I poured them into the pan so that you could see them when eating the omelette. This time however the ingredients did not have the height required so I was forced to change tactics a bit. It was easy enough though and I just cooked the bacon, mushrooms and kimchi and set them aside added the eggs and let them start to cook before adding the cheese followed by the rest of the ingredients so that they cooked into the top of the omelette as the eggs set. The kimchi, bacon and shiitake mushroom omelette turned out great! The flavour combination was of course amazing and it really worked well held together by warm fluffy eggs and melted cheddar cheese. Given that the omelette version is so easy to make I think that I will be making it fairly often from now on!