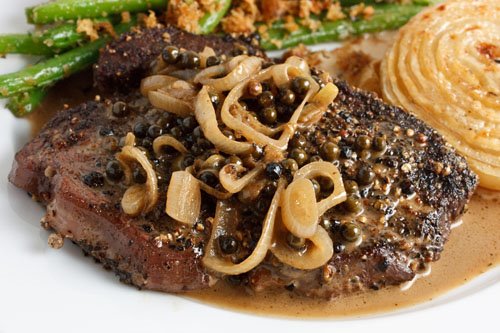 They had some beef tenderloin on at a good price when I was at the market and I picked some up. The only question was what to do with it. I remembered enjoying a peppercorn steak at a restaurant a long time ago and I decided that I wanted to try making it at home. I was not sure exactly how they did it as I remembered some of the peppercorns being hard like I had expected but some of them were also soft. A quick search on the web led me to the discovery of green peppercorns in brine which was just what I was looking for. I was all set, I had some freshly cracked peppercorns to crust the steak and some brined green peppercorns for a sauce to go on it. I really like simple meat and pan sauce recipes like this as they are quick, easy and always tasty and this peppercorn steak was no exception. I got a nice sear on the outside of the steak but the inside was still medium rare, just the way I like it. The peppercorn crust was nice and crunchy and provided a great contrast in texture to the juicy steak within. I could have reduced the green peppercorn sauce a bit more but I was too hungry to wait and it turned out great anyways. The green peppercorns had a texture that I really enjoyed and the sauce was nice and tasty. I served the peppercorn steak with an onion gratin and some parmesan breadcrumbs coated green beans. (More to come on them later.)