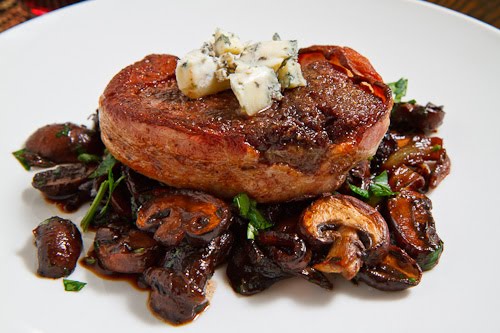 With Valentines Day just around the corner it was time to start coming up with a meal plan and to test it out ahead of time. You can do pretty much anything that you want for a Valentines Day dinner and I like to try to make it a little bit special whether by indulging on quality ingredients or even just by making a meal that takes a bit of extra effort. For some reason, while I was contemplating the menu, I kept coming back to the idea of steak and if I am going to do steak for a Valentines day dinner then it is going to be a nice cut of steak like a filet mignon.
Filet mignon is a really tender cut of beef but it can dry out really quickly if you over cook it so technique is pretty important when preparing it. One way to help keep that steak nice and juicy is to wrap it in a layer of fat. Bacon is a great source of fat and it has the added bonus of adding a bit of flavour and if you use a smoked bacon the smokiness adds another dimension to it. Cooking on the grill would be nice but with it being winter the combination of the stove top and the oven can be just as good. You want to start by quickly searing both sides of the steak at medium-high heat and this caramelizes the outside which in addition to adding flavour it helps seal in the juices. After searing the filet in the pan you finish cooking the it in the oven. Once you pull the filet out of the oven you want to make sure that you let it rest for a while so that the juices trapped inside can redistribute and this way they will not all come pouring out with the first cut. While you let your filet rest it is the perfect opportunity to make a pan sauce taking advantage of all of those caramelized bits of meat left in the pan.
Mushrooms go really well with steak and it is a combination that I find hard to resist. I like to do a simple saute of onions and mushrooms and since it takes some time to properly caramelize the mushrooms, I start cooking them before I start on the steak. The only problem with this approach is that now I have two pans to deglaze! The simple solution is to deglaze the pan that the filet mignon was cooked in and then pour the sauce into the mushrooms and deglaze that pan as well. This time I kept things simple and I simply deglazed the pan with red wine that along with a ab of butter, made an excellent sauce for the mushrooms.
Speaking of red wine, it recently occurred to me that although I like to try to eat locally I had not been paying much attention to local wines. Since then, I have been trying to pick up an Ontario or Canadian wine every once in a while and this was the perfect chance. Red wines go really well with steak and for this dinner I went with a merlot-cabernet that was made on the Niagra pennisula, which is just a short distance south of Toronto. In addition to enjoying a glass with the meal I used the red wine to deglaze the pans and to make the sauce for the mushrooms. (If you are interested in learning more about Ontario wines the Wine Country Ontario site is a good place to look.)
The flavour and texture combinations in this meal are simply amazing! When you fist bite into the filet mignon you get the saltiness and smokiness of the bacon followed by the warm, juicy, melt in your mouth tenderness of the fillet mignon itself. Combine that with just a touch of a creamy and mellow blue cheese and its like heaven in your mouth. Just be sure to try to fit some caramelized mushrooms and onions on your fork to complete the fantastic flavour combinations.
Tip: When buying your filet mignon, go for a the ones with some nice marbling as that marbling is full of flavour and it helps keep the meat nice and juicy and tender.