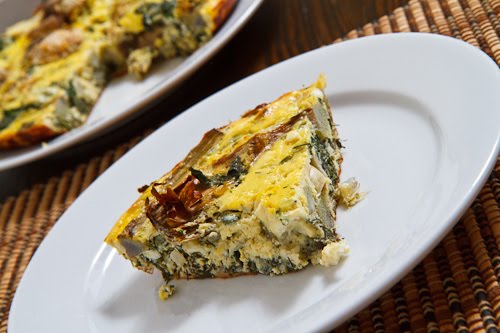 I first came across artichokes a little after I started food blogging and I shied away from them as they seemed a little intimidating at the time. Just over a year ago I finally got around to trying them and I have been hooked ever since! Over the winter I was using canned artichokes but I have been seeing fresh ones in the grocery stores the over last few weeks and I have just been itching to use them again. As luck would have it I recently came across this recipe for an artichoke and spinach frittata on Cara’s Cravings that sounded really good. The spinach and artichoke combo reminded me of one of my favourite dips, the hot spinach and artichoke dip , which I can never get enough of. I made a few changes to the recipe including using fresh chopped dill, replacing the cheese with feta and of course using the fresh artichokes.
I started with 2 medium sized artichokes, and I quartered them after picking off the inedible outer petals and peeling their stems. I then removed the fuzzy insides and quickly blanched them before adding them to the frittata. Preparing the fresh artichokes took a bit of work but it was worth it! (Of course you could easily save yourself some time and simply use frozen or canned artichokes.) I ended up with nice large pieces of artichokes that gave the frittata a rustic feel to it and they were definitely tasty! The spinach, feta and dill flavour combo has been one of my favorites for a while now and it worked really well in this frittata and the artichoke took it over the edge making it that much better! Luckily I made enough that I will be enjoying this frittata for breakfasts for the rest of the week.