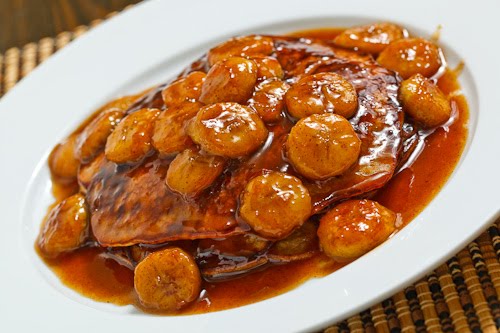 A while ago I caramelized some bananas for use in huevos motulenos and they were so good that they have been on my mind since. I noticed that I had some over ripe bananas in the freezer that were crying out to be used and I was thinking that I could kill to birds with one stone in the form of banana pancakes topped with caramelized bananas. For a recipe, I went with a pretty basic banana pancake recipe and I added some bananas caramelized in butter and brown sugar to top the pancakes. As I thought about it, the bananas caramelized in butter and brown sugar sounded an awful lot like the beginnings of bananas foster and all I would really need to do to finish it off was to add a splash of dark rum which I decided to do. The bananas foster pancakes turned out so fantastically well! The pancakes were nice and light and fluffy and had the amazing aroma and flavour of bananas all by themselves but then they topped them with even more banana-y goodness. I am glad that I decided to add the rum as brown sugar does not dissolve into butter all that well and as soon as I added the rum the sugar disolved and the whole thing turned into a beautifully thick syrup that was just packed with flavour! Note: Bananas foster is typically finished by igniting the alcohol but I chose to omit this step. 🙂