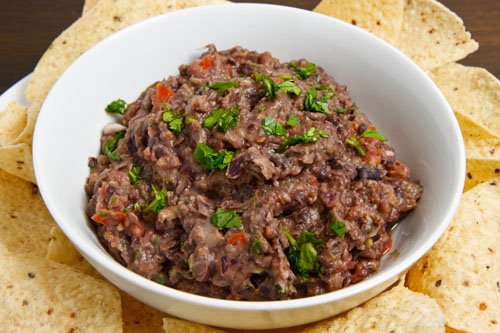 The other day while I was enjoying the guacamole that I made to go with the tacos I was thinking that one of the things that I like most about guacamole was that the avocado made it so creamy. One thought led to another and the next thing that I knew I was thinking that black beans are also nice and creamy and that they might make a nice guacamole. I pretty much just took my guacamole recipe and replaced the avocados with the black beans. I also added a bit of chili powder for some more heat and a bit of smokiness from the chipotles in the blend of chilies. When it came time to give the black bean guacamole a name I was not sure what to call it. It is not really a guacamole so maybe its just a black bean dip but then again its made just like a guacamole. If I had not pureed everything I probably would have called it a black bean salsa… Whatever you want to call it, it turned out great! The black beans certainly made it nice and creamy and good. What I liked most about it was that using all of the fresh ingredients, especially the cilantro, gave it a really nice feeling of freshness. I served the black bean guacamole as a dip along with some tortilla chips for scooping.
Update: A quick look up of the Nahuatl language seems to indicate that yetlmole or etlmole might be a good name for a “bean sauce”.