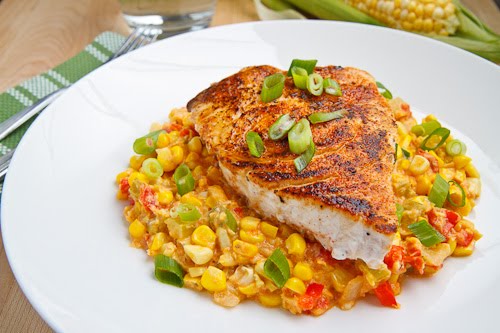 White fish that is coated in a tasty seasoning blend and quickly blackened at hight temperature to seal in the juices.

One of the things that I really enjoyed about New Orleans was all of the amazing seafood and I took the opportunity to have it as frequently as possible while I was there. One of my favourite meals was a blackened swordfish and I just had to try making it at home! The basic idea behind a blackened fish s that the fish is seasoned and then briefly seared at high heat until the spices and the surface of the fish just start to blacken, but not burn. The high heat cooking helps seal in the fishes juices and toasts up the spices releasing their flavour. You do have to watch out both because you neither want the fish to actually burn or over cook so a brief cooking time is called for. For the seasoning I used a homemade creole/cajun spice blend and I served the blackened swordfish over a sweet and creamy corn maque choux

White fish that is coated in a tasty seasoning blend and quickly blackened at hight temperature to seal in the juices.