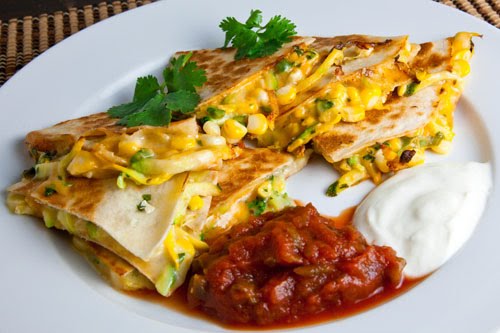 The farmers market has been overflowing with zucchini lately and I have been picking some up every week. Lately I have been enjoying working with grated zucchini and the last time I used it this way I thought that it would be perfect as a quesadilla filling. I have also been picking up some corn every week at the farmers market and while I was thinking about the zucchini quesadilla I thought that some sweet corn would also go well in the cheesy quesadilla. After the corn and zucchini I threw in some of my standard quesadilla ingredients including some green onions, cilantro and of course some jalapeno pepper for some heat. I was a little worried that the grated zucchini might be a little moist for quesadillas and since no one wants a soggy quesadilla I made sure to squeeze out and excess moisture from the zucchini after grating it. The corn and zucchini quesadillas turned out great! They were nice an golden brown on the outside and warm and gooey and cheesy and good on the inside. The zucchini and corn filling worked really well in a cheesy quesadilla. I served the quesadilla along with some salsa and sour cream for dipping.