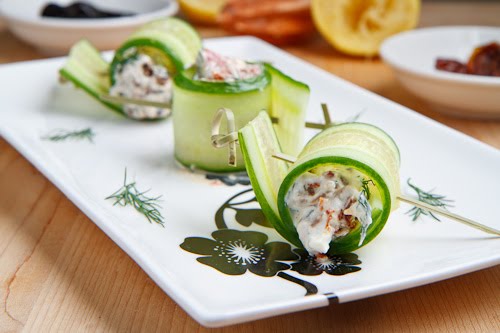 With all of the decadent snacks that I have been testing out lately I know that some of you are wondering: “Are there any lighter options?”, and these cucumber feta rolls definitely fit the bill! When I first came across the recipe for these cucumber feta rolls on Good Life Eats I knew that I would have to make them and I have just been itching for the chance! A lot of my favourite Greek flavours are used in the cucumber rolls and they even kind of remind me of deconstructed and reconstructed tzatziki with the cucumbers, lemony Greek yogurt and plenty of fresh herbs. 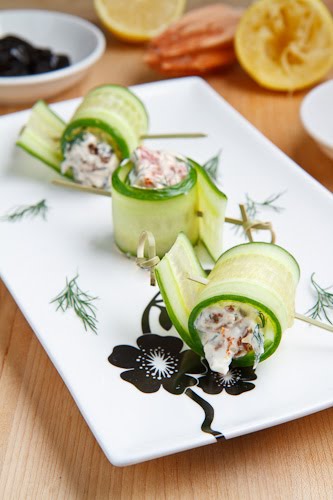 The recipe for these cucumber rolls is super easy and if you have a mandoline to cut the cucmbers thinly then it takes almost no time at all to make them. Really this recipe is more of an idea and once you have base of the cucumber, yogurt, feta and lemon you can finish them off with almost any flavours that you can dream up! I went with three different flavours; sun-dried kalamata olives with parsley, sun-dried tomato with dill, and roasted red pepper with oregano. Some other flavour combinations I was thinking of include spinach and dill for a spanakopita inspired version and a marinated roasted red pepper version where I would use white balsamic vinegar instead of the dark balsamic. I was also thinking that a smoked salmon and dill version would be truly amazing!