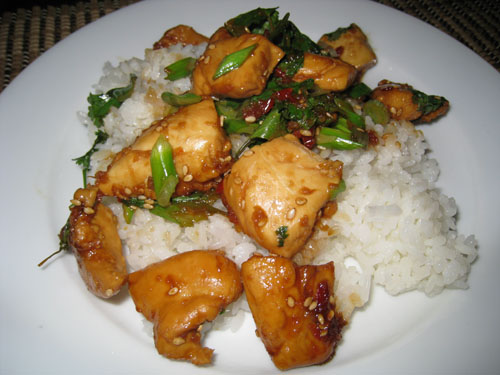 Lemons are pretty versatile. Despite the fact that they are tart they go really well in sweet dishes. Lemons can also be used in savoury dishes though I have not had all that many. When I came across the concept of an Asian style lemon chicken dish I had to try it. Most of the recipes that I found for lemon chicken called for coating the chicken in corn starch or flour and frying it in oil. Since the chicken would then be placed in a lemon sauce and become soggy I was not too sure why it was deep fried in the first place. I decided to come up with a way of making lemon chicken without frying the chicken. In the end I decided to marinate the chicken in a lemon marinade and then saute the chicken and reduce the the marinade into a sauce. Although the dish did not turn out to be too photogenic the lemon chicken was really tasty. It had a really nice lemon flavour and it was tart but not too tart. The cilantro and green onion along with the lemon flavour made the dish taste really fresh. I think that the next time I make this I will add more chili heat to it. I will also have to try making the version with the breaded and fried chicken to compare.