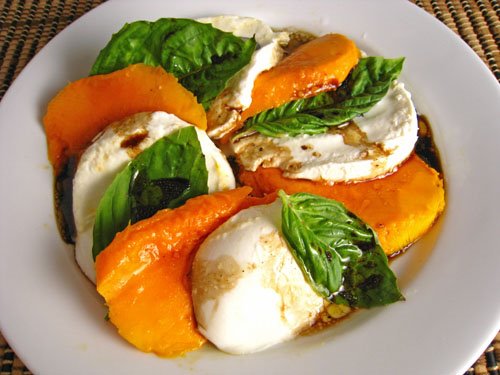 I have really been enjoying the mangoes so far this year but I had only been having the Mexican mangoes. Zen Chef left a comment on my Mango Crisp with Macadamia Nut Crust post that mentioned that Indian alphonso mangoes were in season and that they were pretty good. I looked up alphonso mangoes a quickly learned that they were considered by many to be the best of the mangoes. I just had to try them! The problem was locating some. I ended up finding them at a small grocery store in Little India in Toronto. They were a bit more expensive than the mangoes that I had been getting but I picked up a case of them anyways. They were under ripe and I had to wait a few days for them to ripen. That gave me a chance to think about how I would enjoy them.
I remembered seeing this really interesting recipe for a mango caprese salad . It is a twist on the classic caprese salad with the tomatoes replaced with sliced mango. Making a caprese salad also gave me the perfect excuse to pick up some fresh imported buffalo mozzarella which I had been wanting to try for a while. I dressed the salad up with a simple balsamic vinaigrette made with some better quality balsamic vinegar. I really enjoyed the mango caprese salad! It was nice and simple and light and every thing about it was good! The alphonso mangoes easily lived up to their hype, being sweet and flavourful. The fresh mozzarella was nice and soft and cool and moist. The balsamic vinegar rounded off the salad by adding a sweet and tart bite.