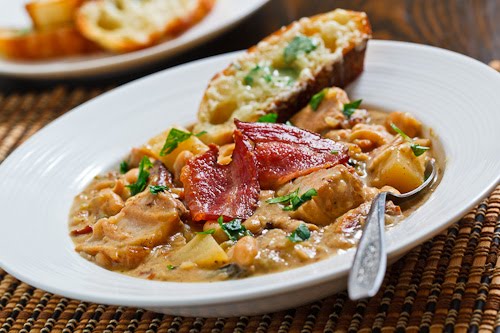 No matter how much you enjoy them, there are only so many porchetta sandwiches that you can have in a row before you start wanting something a little different. I still had a large chunk of my porchetta and I was thinking that a creamy porchetta chowder would do the trick. I started out by building up the flavour base with some double smoked bacon and then I moved on to the standard aromatic vegetables including onions, celery and carrots, though for this chowder I left out the carrots as I felt that the orange colour would be a bit bright in the chowder. I wanted the chowder to be creamy without having to rely completely on cream so I went with some simple tricks to add creaminess including pureeing half of the cannellini beans that I was adding and grating a baking potato. (Pureed beans are a great way to add creaminess to any soup and baking potatoes tend to fall apart when boiled for long periods of time so if you help them along by grating them first they will disintegrate quickly and make any soup creamier.) I still wanted to have big chunks of potato in my chowder so I also diced a stewing potato and threw it in along with the porchetta and some herbs and spices.
The porchetta chowder turned out amazingly well! It was certainly decadently creamy and with the large pieces of succulent porchetta every bite was pure indulgence. The chowder was nice tasty and I really enjoyed the combination of textures. I served the porchetta chowder with some braised rapini and cheesy garlic bread . 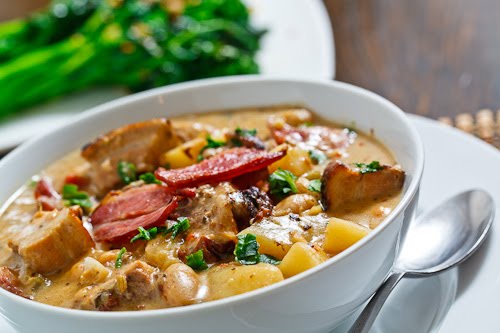