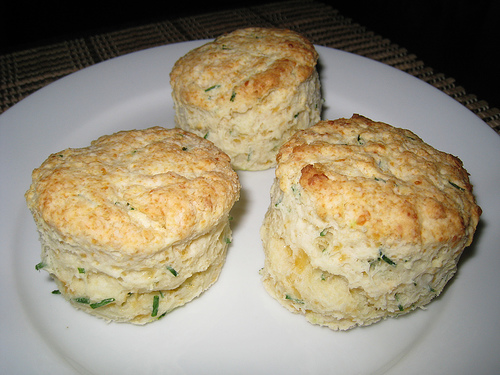 Not too long ago I tried making buttermilk biscuits and they turned out really good. While I was looking for a recipe for them I came across the concept of sour cream biscuits with chives which sounded pretty good. Chives are a herb that I seen at the grocery store but never actually tried cooking with so I was looking forward to trying them. I decided to use the recipe that I used for the buttermilk biscuits and just replaced the buttermilk with the sour cream. I added a bit of cheddar cheese to the biscuits for some extra flavour. They turned out nice and light and fluffy. I was a bit disappointed that the chives did not have that much flavour. I am not sure if it was just the bunch that I got or if chives in general do not have much flavour. I will have to try working with them again. Overall the experiment was a success as the sour cream biscuits were nice. There are still a lot of biscuit flavour combinations that I want to try.