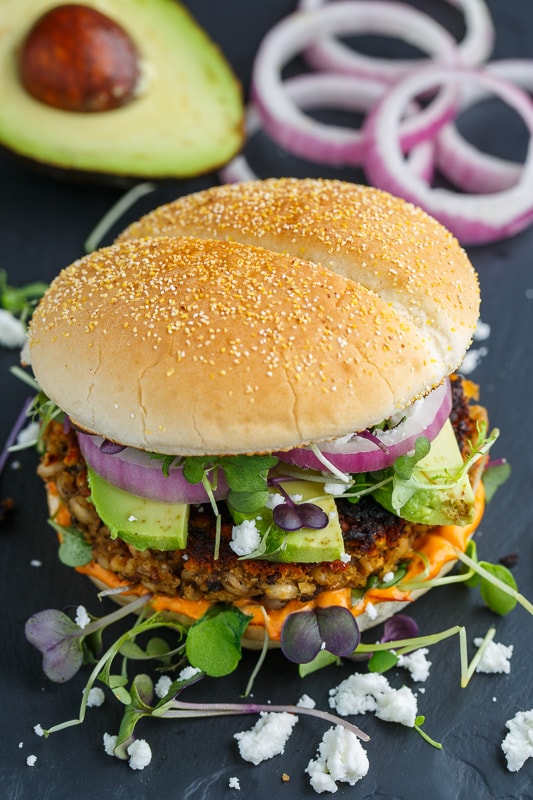 Tasty burgers made with mushrooms, eggplant, chickpeas, barley and cashews that are just packed with flavour and have an amazin texture.

I like a good beef burger and I also like to change the meat up and so lamb, turkey, and pork make frequent appearances. Another option that I have been increasingly seeing in restaurants and that I have been getting requests for is veggie burgers or burgers made with the primary ingredient being vegetables. If you are looking for a veggie burger that reminds you of a meat burger then you have to get the texture and the flavour right, which isn’t too difficult. The basic recipe for veggie burgers is vegetables, that are cooked before adding them to the patties to remove any excess moisture, beans, a grain and often a nut to build the texture of the burger and then some seasonings to build the flavour. One of my favourite combos for the veggies are mushrooms and eggplants which are both roasted to remove the moisture and to add flavour! The eggplant is then pureed along with chickpeas to form the base of the binder of the patty. The mushrooms, chickpeas, and cashew are chopped rather than pureed to give the burgers a nice texture and the barley adds to that texture so that when you bite into the burger it feels like there is something of substance there! I add dried mushrooms, parmesan cheese, miso paste, garlic, Worcestershire sauce, and Montreal steak seasoning which provide a ton of umami flavour! The final ingredient is the breadcrumbs which is the last component of the binder that helps hold the patties together. These burgers take a bit of effort to make but they are well worth it! You can make the mixture the day before and add the breadcrumbs when ready and then it only takes a few minutes to form the patties and grill them! These mushroom and eggplant veggie burgers are such an amazing way to enjoy a burger! 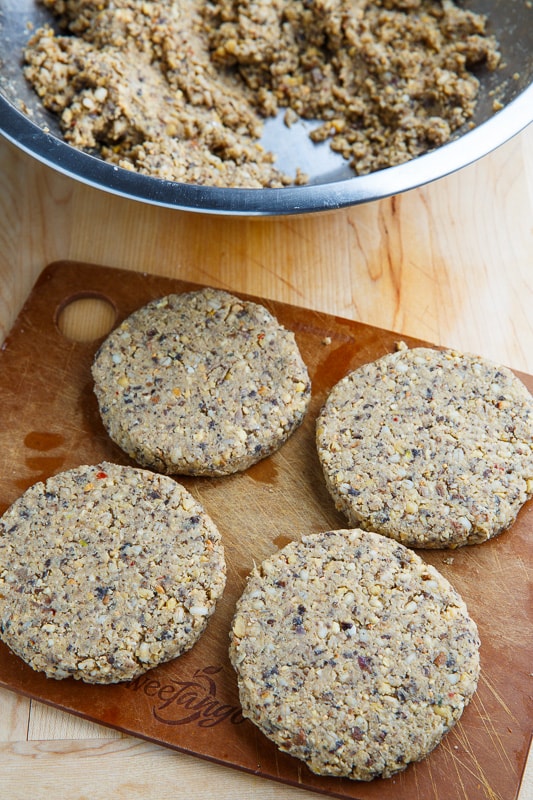 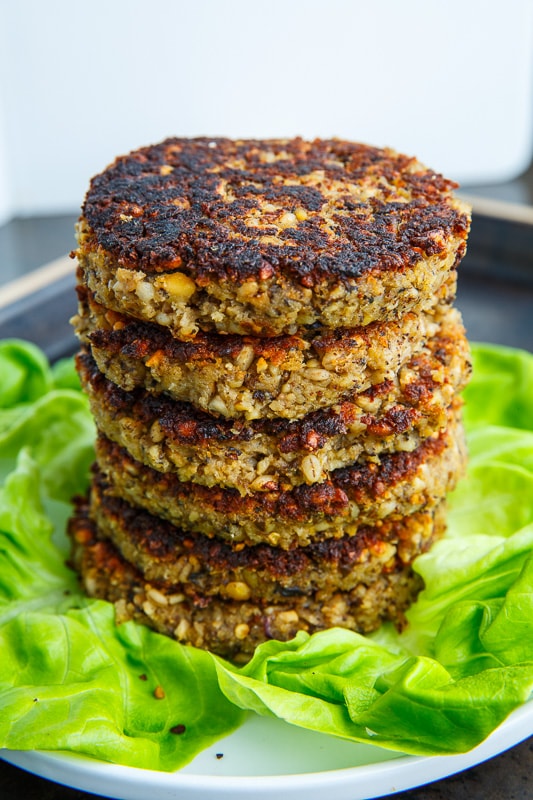 I stuffed these burgers with feta, sprouts, avocado, onions, and gochujang mayo! Yum! 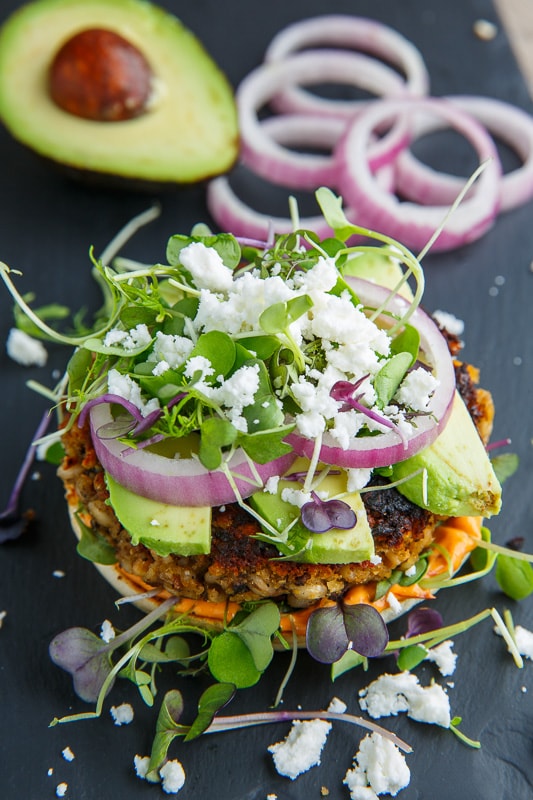 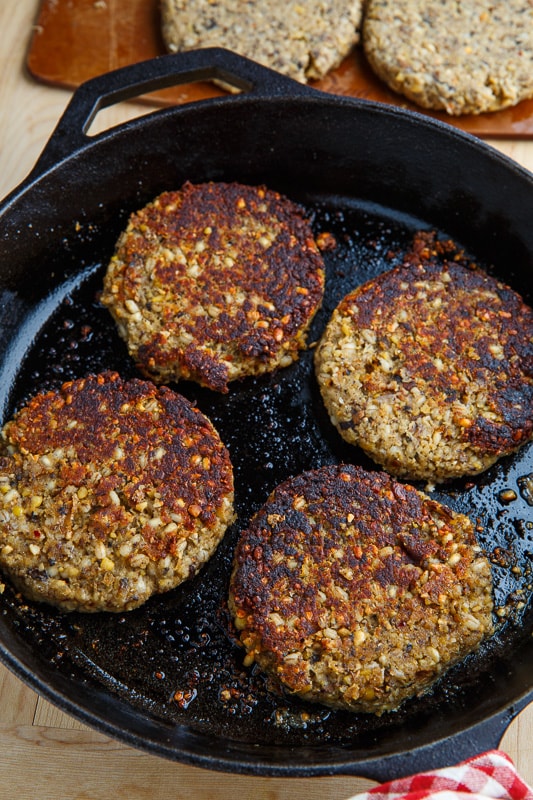 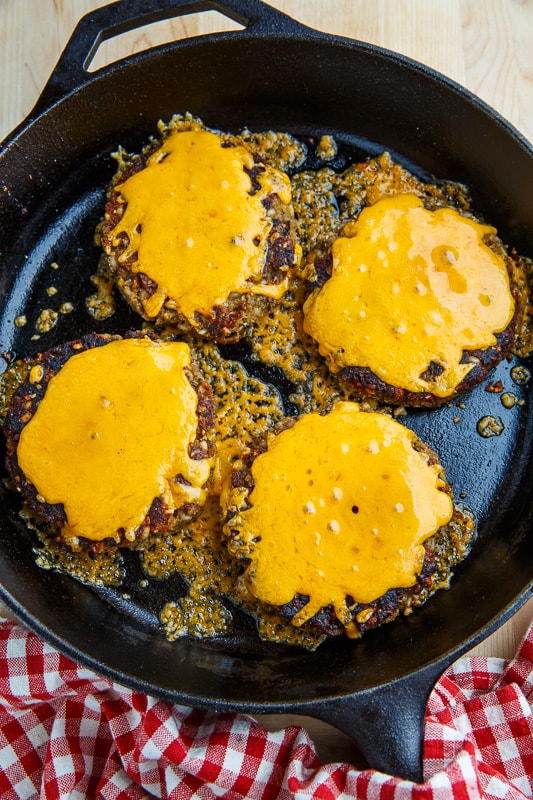 I went with onions, pickles, tomato, lettuce, and gochujang mayo in the bun for these melted cheddar veggie burgers! 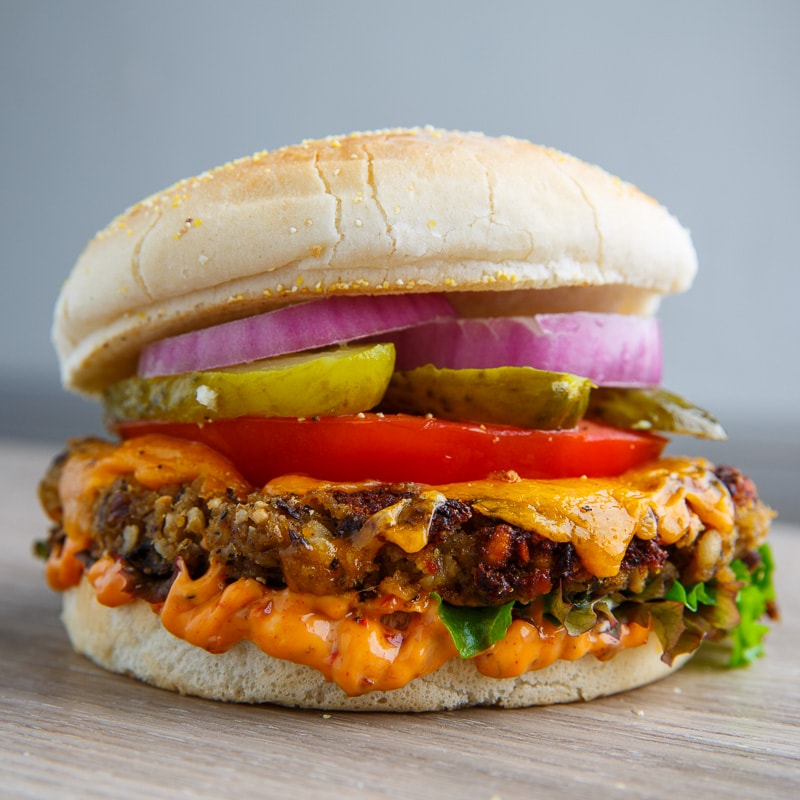 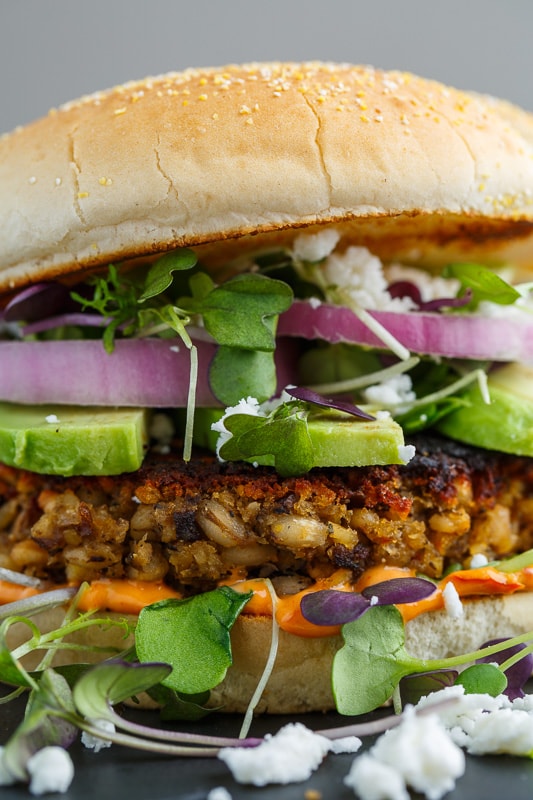 Tasty burgers made with mushrooms, eggplant, chickpeas, barley and cashews that are just packed with flavour and have an amazin texture.

Note: You can make the mixture, minus the breadcrumbs, a day ahead, mix in the breadcrumbs when ready and continue to form the patties and cook the burgers!
Nutrition Facts: Calories 220, Fat 4.4g (Saturated 1g, Trans 0), Cholesterol 2mg, Sodium 216mg, Carbs 38.2g (Fiber 8.8g, Sugars 6.1g), Protein 9.9g
Nutrition by: