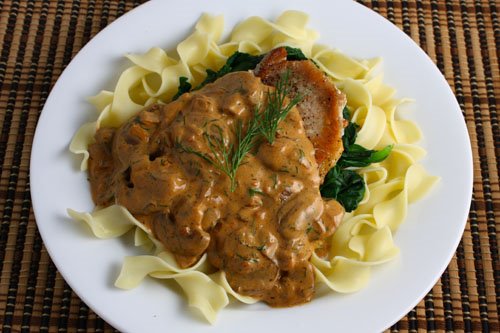 The beef stroganoff that I made a while ago has been on my mind and I was really craving it again. With the holidays coming I have not had much time at all and I have been looking for quick meals so braising the beef for the stroganoff was out of the question. I had some pork chops in the freezer that needed to be used and I thought that pork chops with a mushroom, dill and sour cream sauce similar to the stroganoff sauce would hit the spot. This recipe turned out to be much quicker than the original but it was no less tasty. I served the pork chops with mushroom, dill and sour cream sauce on egg noodles and I added some steamed spinach to make it a one dish meal. This new sauce was really tasty; lick the plate clean good in fact. With the sauce on top it covered the pork chops, the noodles and the steamed spinach in it rich flavourful goodness. It was one quick and tasty meal that satisfied my cravings.