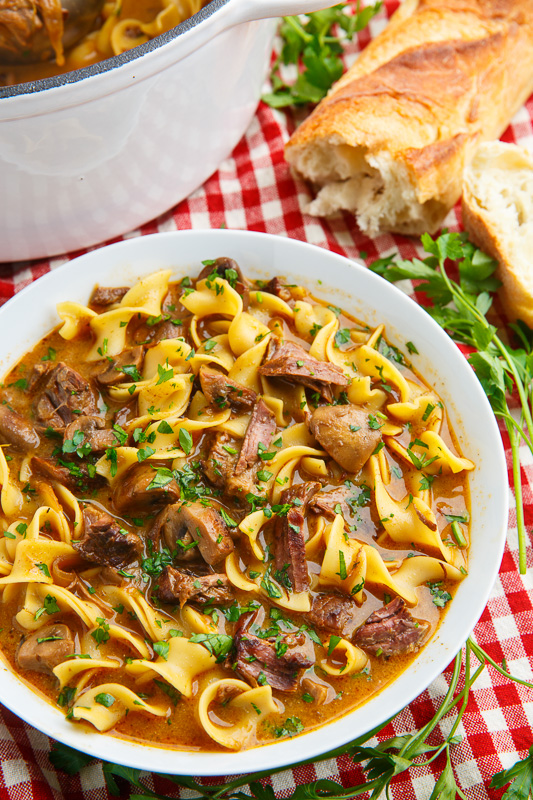 A warm an comforting bowl of slow braised beef stroganoff soup with melt in your mouth beef and egg noodles in a paprika and sour cream broth!

With the cooler days I have been enjoying a lot of soups and the one that I have been crushing on recently is this slow braised beef stroganoff soup! This soup was inspired by the flavours of beef stroganoff with the beef in a paprika and sour cream broth along with egg noodles! Instead of going for a quicker stir-fried beef version I like a slow braised beef one that takes nice big chunks of stewing beef and slowly simmers it until it’s melt in your mouth tender; pure comfort food in a bowl! This recipe starts by browning the beef to build the flavour, followed by cooking the onions and mushrooms until they start caramelizing, which continues the flavour train! Next up we have some garlic, and thyme and one of the primary ingredients, the paprika which when combined with the sour cream, forms the base flavour for the broth. The flavours just keep getting better with the addition of dijon mustard, worcestershire sauce, a hit of fish sauce and a personal favourite, dill. After the soup braises for a few hours, and all of the flavours have had a chance to come out and mingle and the beef tenderizes, it’s time to add the egg noodles to cook before adding the sour cream and enjoying! After writing this I can’t wait to curl up in a comfy chair with a nice big bowl of this slow braised pot roast beef stroganoff soup tonight! 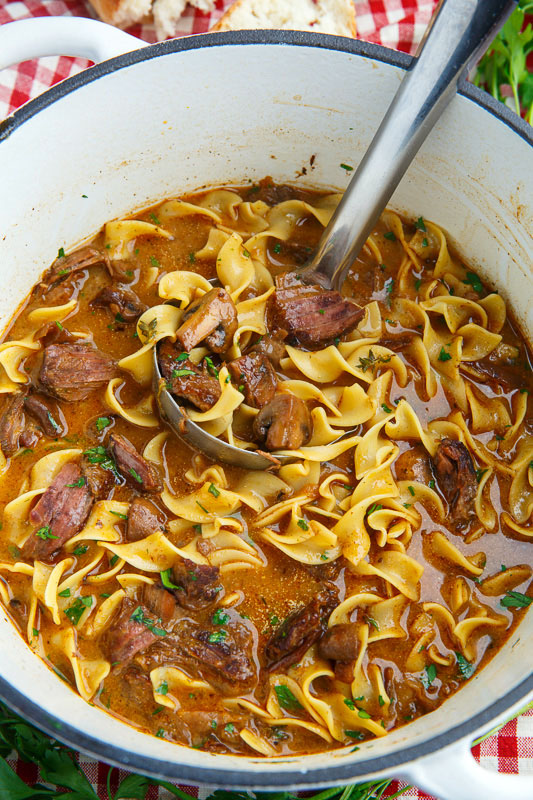 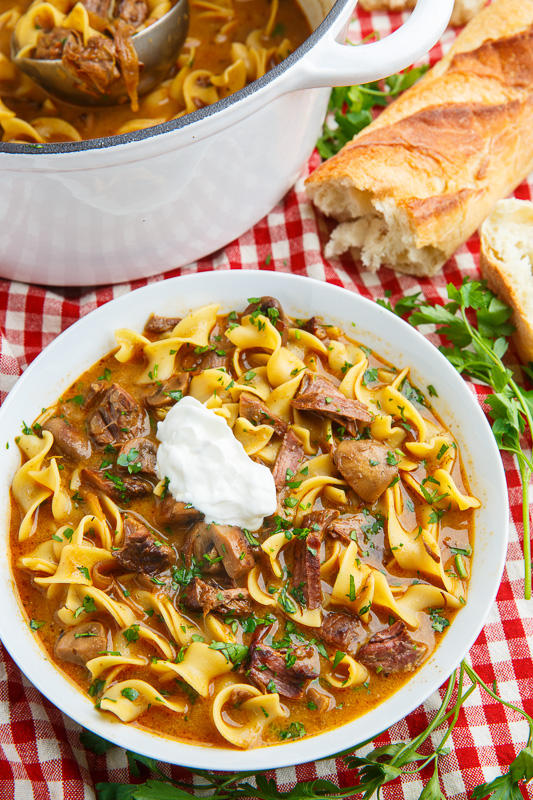 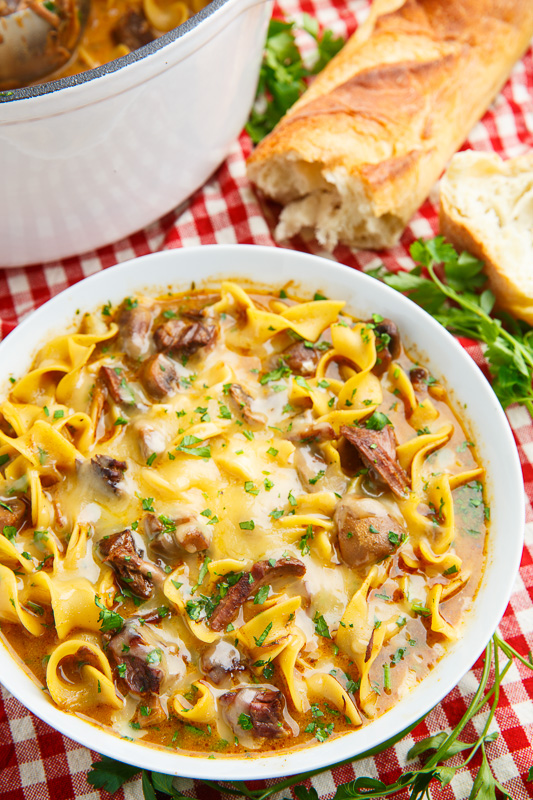 Top with cheese and melt! Gouda in this case! 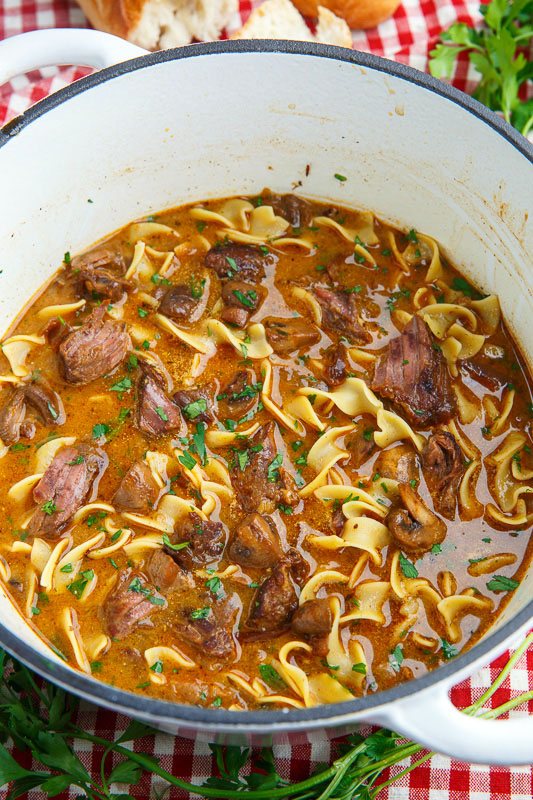 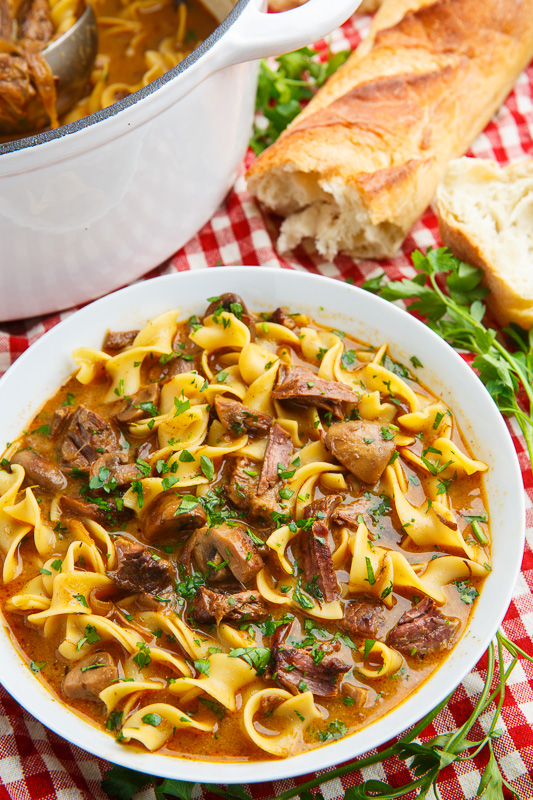 A warm an comforting bowl of slow braised beef stroganoff soup with melt in your mouth beef and egg noodles in a paprika and sour cream broth!

Slow Cooker: Optionally skip steps 1-4 and just place everything in the slow cooker (except the sour cream) and cook as directed, for a quicker version.
Option: Start by cooking 4 strips bacon cut into 1 inch pieces and use the bacon grease to cook the steak and veggies in instead of oil and butter adding the bacon back into the sauce near the end!
Option: I like smoked hot paprika for this but your favourite type of paprika will work!
Option: I like dried dill in this but it is a none standard ingredient so feel free to omit it.
Option: Add a pinch of red pepper flakes with the garlic for a bit of heat.
Option: Add small onions in addition to the diced onion for even more onion flavour!
Option: Instead of the fish sauce use 1-2 tablespoons white miso paste.
Option: Add 1 tablespoon tomato paste to the sauce.
Option: Add 1/2 cup grated parmigiano reggiano (parmesan cheese) for an even more flavourful sauce!
Option: Serve topped with cheese and melt it under the
Nutrition Facts: Calories 322, Fat 10g (Saturated 3g, Trans 0), Cholesterol 74mg, Sodium 743mg, Carbs 18.9g (Fiber 3g, Sugars 5g), Protein 33.2g
Nutrition by: