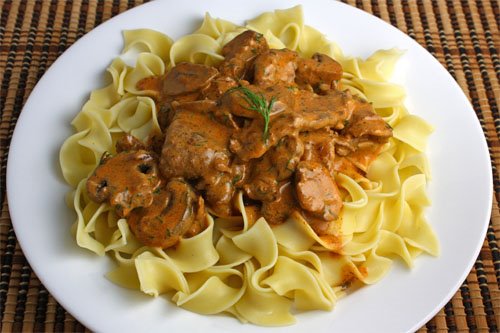 I recently realized that I had not had beef stroganoff in a very long time and I wanted to try making it. According to the wikipedia beef stroganoff is a Russian dish consisting of beef in a sour cream sauce. My mother made this a few times while I was growing up and I remembered really enjoying it. I searched the net for some recipes though I already had an outline in mind. I knew that there would be some onions and mushrooms in addition to the beef. One idea that I did come across was to add paprika and although I had never had it that way, it sounded like a great idea. The paprika and mushroom combination reminded me of a mushroom soup that I had made a while ago and really enjoyed. That soup combined mushrooms, sour cream, paprika and dill and I had really like the flavour combo so I decided to add some dill to the stroganoff as well. I added some dried dill while the sauce was simmering and some fresh dill just at the end for the best of both worlds.
I figured that there were two main ways that I could cook the beef. I could either get a really tender cut of beef and quickly saute it or I could get a much cheaper cut of beef and braise it until is was nice and tender. Since I had the time and I really enjoy braising I decided to go with that route, though there is a quicker option if you are short on time. While I was rummaging through my fridge I came across some bacon and I decided to throw it in as well to kick up the flavour a bit. I also sauteed the beef in the bacon grease so as to not waste any of that flavour. I then let the beef simmer in the sauce until it was fall apart tender.
The beef stroganoff was amazing! It was so full of flavour that only got better the next day. The beef was nice and tender and it seemed to just melt in your mouth. The sauce was nice and creamy and tasty and I really enjoyed the mushroom, paprika, dill and sour cream flavour combination. I served the beef stroganoff on egg noodles though you could use any type of pasta or rice, etc. I am looking forward to making this again!