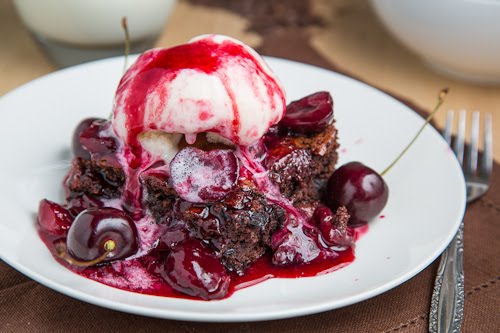 Dark chocolate brownies filled with chunks of roasted cherries and served as a sundae topped vanilla ice cream and a cherry port sauce.

The cherry season has been nice and long and they are still plentiful and cheap which is good because I recently came across the idea of using them to make roast cherry brownies on Foodie Bride which I just had to try! I always enjoy roasting things because it tends to concentrate and strengthen their flavour and I really liked the sound of hitting the little nuggets of concentrated cherry flavour deep under the surface of chocolate brownies! 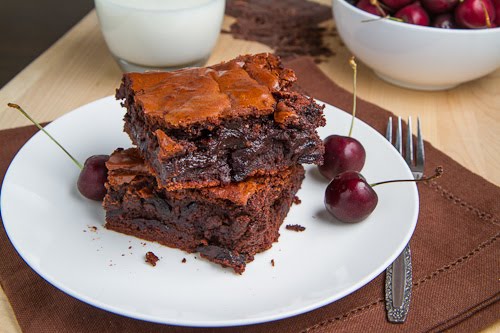 Not only are the cherries for the brownies roasted but they are tossed in and roasted in port; how decadent! Once the cherries are roasted you just need to mix them into the brownie batter and bake them as you normally would. Speaking of the brownie batter, I went with a really easy, made from scratch recipe that uses melted dark chocolate for the chocolate flavour.
Chocolate and cherries are a match made in heaven and these irresistible roasted cherry dark chocolate brownies show you just why! As if the brownies were not good enough already but try serving them topped with a scoop of melting vanilla ice cream and a cherry and port sauce and they become absolutely divine! 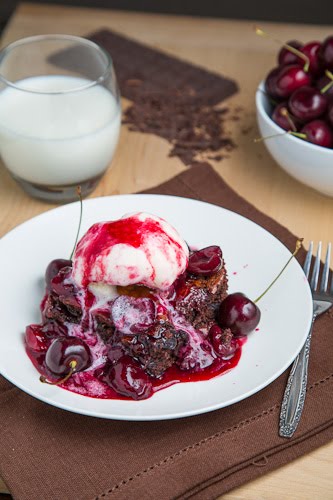 Dark chocolate brownies filled with chunks of roasted cherries and served as a sundae topped vanilla ice cream and a cherry port sauce.